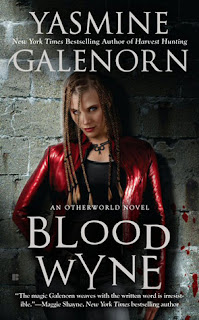 
We're the D'Artigo sisters: half-human, half-Fae, we're sexy, we're savvy and we just turned in our badges to the Otherworld Intelligence Agency. My sister Camille is a wicked good witch. Delilah's a werecat and blossoming Death Maiden. And as for me? I'm Menolly, acrobat extraordinaire turned vampire. But being a vamp isn't all it's cracked up to be, especially when the Godfather of all vampires decides to play Prince Charming...

It's the holiday season and a vampire serial killer is on the loose. Hungry ghosts are tearing up the town and people are running scared. I strike a deal with Ivana Krask--one of the Elder Fae--and too late, discover strings are attached. But when I turn to Roman, one of the oldest, most powerful vampires around, for help, he offers me more than I ever bargained for.

This is now my favorite Menolly Book. She has grown so much throughout the series. She has had to move on from a horrific past and it is so nice to see her open herself up a little and watch her change. There is a decent amount of action in BLOOD WYNE as well as some sexy scenes. Lots of things happen in BLOOD WYNE that I think are going to shake up all the sisters lives and affect future books. A new character that is introduced is definitely going to shake up Menolly's life and I cant wait to read about it.There hasn't been one book of Ms Galenorn's that I haven't enjoyed reading so far so I would defiantly recommend you pick up one of her series.