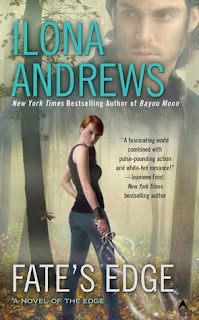 
Audrey Callahan left behind her life in the Edge, and she's determined to stay on the straight and narrow. But when her brother gets into hot water, the former thief takes on one last heist and finds herself matching wits with a jack of all trades...

Kaldar Mar-a gambler, lawyer, thief, and spy-expects his latest assignment tracking down a stolen item to be a piece of cake, until Audrey shows up. But when the item falls into the hands of a lethal criminal, Kaldar realizes that in order to finish the job, he's going to need Audrey's help...

Audrey is the first of the female heroines of The Edge series to not be close to her family. She was born into a family of thief's and wants nothing to do with them now. She is finally doing what she wants with her life, staying above the law and taking care of herself in a respectable way when Her father shows up one night and talks her into one last heist that pulls her into drama that she wants desperately to get out of and put right at the same time. FATE'S EDGE also takes place a big chunk of the time in the broken. I liked the mix between the Broken and the edge and the mix of magic and non magic.

Kaldar happens to be one of the brothers of Cerise from BAYOU MOON. He is the matchmaker of his family but has never considered taking a wife himself but Audrey catches his eye from the moment he meets her. There is also quite a bit of secondary characters from both book one THE EDGE and book two BAYOU MOON in FATES EDGE. Jack and George the brothers of Rose are a big part of the story with some minor parts from both Cerise and William and Gaston, Cerise and Kaldar's nephew.

For most of the book Kaldar spends his time trying to convince Audrey to take him to bed while Audrey spends her time pushing him away so she doesn't get hurt. There romance was fun to watch and provided plenty of sexual tension. Kaldar was a great flirt and had me laughing at his tactics quite a few times. There are some great action scenes as they are dodging The Hand at every turn. I really felt that Kaldar and Audrey worked well together and meshed well with the other characters of the series. I like that the series is thoroughly connected even though each book has its own guy and gal romance and story. I cant even begin to imagine how Ilona Andrews will end the series but I cant wait to see where Ilona Andrews takes the series next.