UFI welcomes J.A. Redmerski Author of The Mayfair Moon. Thanks for Joining us!!

STEPPING OUT OF THE WRITING CAVE

I don’t know about you, but it gets stuffy in my writing cave. And it’s dangerous in there. Trust me. I think a lot of writer’s block comes from us getting too used to the scenery, walling ourselves up in our rooms and offices and forgetting that in order to write about the world around us, we need to experience it more than we do. We don’t get out enough! I admit it, I still don’t get out enough because I do have a chain shackled to one ankle and my computer happens to be the iron ball on the other end of it. But I eventually force myself to break out the damn key and leave my writing cave for a while. Because it’s healthy. And you’d be surprised what—forgive the cliché—stopping to smell the roses can do for your writing.

Take a tablet, or a voice recorder, even a camera, or nothing but your memory and go somewhere, anywhere. It doesn’t have to be under a tree, or on the beach, or that little corner table at Starbucks. One day I went to Walmart. Haha! Yes, I’m serious. I sat down on one of the benches at the front of the store and just watched everybody come and go. Of course, I made sure not to look like some freaky stalker (at least I hope I made sure!), but I paid attention to those people and realized more than ever how we take for granted this seemingly small and insignificant source of inspiration. Every day we go out in public we tend to stay in our little bubbles. We don’t pay much attention to those around us, how that guy in the suit walks with a slight limp, or how that woman just covertly pinched her child’s arm for being ‘bad’ because she can’t spank him in public. Have you ever actually listened to a homeless drug addict talk to himself? Yes, I have! I was at a Laundromat and one happened to come in that day and he kind of scared me, but I was fascinated by his one-sided conversation.

I guess I can’t help it that I’m such a sucker for characters, whether real or fictional, I love personalities.

But getting out into the world whether on a small scale like this, or a larger scale (traveling, etc.), it really helps to open up my mind and helps me a great deal when I write. But it’s not just about characters. It also helps tremendously with writing description. Go out and touch things, see exactly how that jagged stone wall feels on your fingers, or see for yourself how the juice from a honeysuckle plant tastes and pay extra attention to the sound of the vehicles going over the nearest freeway exit bridge. 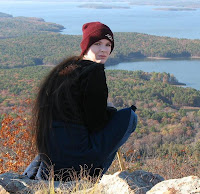 J.A. Redmerski is a Contemporary Fantasy and YA writer - author of THE MAYFAIR MOON and DIRTY EDEN. She’s a mother, werewolf & zombie fanatic, book addict and a happy hermit obsessed with the Universe. Oh, and AMC's "The Walking Dead".

Jessica started her first novel at the age of thirteen and has been writing something ever since. Generally, she loves characters in life and on paper. She pays attention to people, especially those whose personalities make them different from the rest of us: the drug addict roaming the Laundromat that talks to himself, the young, inattentive mother in the park with the meanest kid on the playground - (the entire cast of 'Swamp People') - characters fascinate Jessica and she hopes that it shows in her literary work. Some authors that inspire Jessica are Neil Gaiman, Cormac McCarthy, Max Brooks,
Anne Rice, J.K. Rowling, Richard Matheson, William R. Forstchen, Carrie Ryan, Stephenie Meyer and Lisa Smedman.
__________________________________ 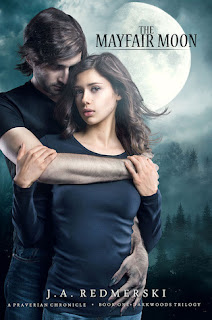 The Mayfair Moon
The Darkwoods Trilogy #1


After a nightmarish encounter with a werewolf, seventeen-year-old Adria Dawson loses her sister, but gains the love of a mysterious young man and his legendary family.

Strange and tragic things begin to happen in the small town of Hallowell, Maine: residents come down with an unexplainable ‘illness’ and some disappear. In the midst of everything, Isaac Mayfair is adamant about keeping Adria safe, even from her sister whom he has warned her to stay away from.

As unspeakable secrets unfold all around Adria, impossible choices become hers to bear. Ultimately, no matter what path she takes, her life and the lives of those she loves will be in peril. As she learns about the werewolf world she also learns why her place in it will change the destinies of many. 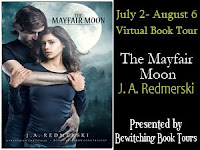