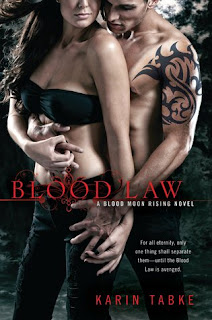 
For all eternity, only one thing shall separate them—until the Blood Law is avenged…

The coming of the Blood Moon will lead two Lycan packs into war, spur two rival brothers into conflict, and spark an act of vengeance so evil that its effects will be felt for generations.

One woman stands at the center of it all…

As undisputed Alpha, Rafael must choose a life mate to preserve the dominance of his Lycan pack. He never suspected, his mate would be a human, the same wounded, girl-woman he seduces from the brink of death. Falon is a dangerous combination of Lycan and Slayer—beings bred to destroy his kind. Even more, she’s a mesmerizing beauty whose sensuality tempts the seasoned warrior to take unnecessary risks. The primal heat between them is irresistible, yet surrendering to it could destroy them both…for a vengeful foe stands ready in the shadows to fulfill what is rightfully his by Blood Law.

The beginning of the book grabbed me and it didn't let me go until the last word of the book.  I loved all the characters, each and every one of them added something to the book and I couldn't imagine one of them not being in it.  Falon and Rafael were drawn together and looked like they should be together from the first time they were introduced even though they fought their attraction. The emotions in Karin Tabke's writing made everything that much better. The sex scenes were super hot, the fights were dirty, and the world was brilliantly developed. The cliffhanger at the end is really making me angry and I already know book two BLOOD RIGHT is going to be more emotional then the first. If you are a paranormal romance fan this is a must read.