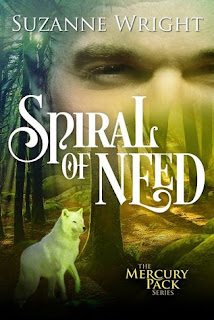 But a girl doesn’t exactly need special powers to know that Derren Hudson despises her entire kind. Disdain practically rolls off the Beta of the Mercury Pack . . . disdain mixed with a healthy dose of desire. And no matter how much the ruggedly handsome male appeals to her, this is one call of the wild she’s determined to ignore.

After one betrayal too many, Derren doesn’t have much use for Seers — except for Ally.

Forced into acting as her protector, he finds himself intensely and passionately drawn to the woman who incites his primal instinct to claim.

And when enemies target the pack, Ally’s gift may be just what the Mercury Pack needs.

Can he put his distrust aside, or will he force himself to turn his back on the one woman who makes his inner beast howl?


I couldn't imagine starting The Mercury Pack series without having read and knowing the ins and outs of all the characters from The Phoenix Pack series, so please do yourself the favor and start out reading the 4 books from The Phoenix Pack series before diving into SPIRAL OF NEED. You will meet the characters, learn their roles, follow their relationships and know so much more about the world that both series take place in. You will not be sorry and you will enjoy SPIRAL OF NEED so much more for it.

Derren quickly became a character I cared about and was rooting. When I saw that SPIRAL OF NEED would feature his love story I may have done a happy dance. I knew his story wasn't going to be easy, but I was really surprised by his growth during SPIRAL OF NEED. He changed his ways of thinking and really became quite a teddy bear when it came to Ally. I knew he was a loyal character and I probably shouldn't have been shocked, but I know it's hard to change your feelings on something when you feel so strongly about it. We meet Ally for the first time in SPIRAL OF NEED and find out very quickly what she is made of. She gets the raw deal with the pack she is in and the Mercury pack does a great job of embracing her once they realize what a great person she is. It takes a little bit, but they get there and that is what matters in the end. Their attraction is pretty electric and they make an awesome couple. I loved seeing both of them in action both in and outside of their relationship.

One of the great things about this series is that we get to see all the past couples and pack members on a regular basis. I loved watching both the Mercury pack and the Phoenix pack come together when it was needed. They really act like one pack, but their too stubborn to admit it. The Phoenix Pack series quickly became one of my fave paranormal romance series and now The Mercury Pack series is right beside it on my list. I look forward to seeing what comes next for both and plan to continue reading both series in order as they come out.

* This book was provided free of charge from the publisher in exchange for an honest review.
Posted by StacyUFI at 3:30 AM 3 comments:

One misstep and they lose it all. For the last time.

Michael Merrick is used to pressure.

He's the only parent his three brothers have had for years. His power to control Earth could kill someone if he miscalculates. Now an Elemental Guide has it out for his family, and he's all that stands in the way.

His girlfriend, Hannah, gets that. She's got a kid of her own, and a job as a firefighter that could end her life without a moment's notice.

But there are people who have had enough of Michael's defiance, his family's "bad luck." Before he knows it, Michael's enemies have turned into the Merricks' enemies, and they're armed for war.

They're not interested in surrender. But Michael isn't the white flag type anyway. There will be blood on the ground tonight…

ORDER INFORMATION
Sacrifice is available for order at 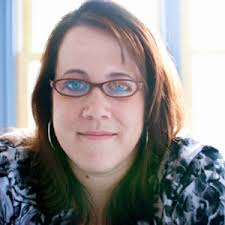 Brigid Kemmerer was born in Omaha, Nebraska, though her parents quickly moved her all over the United States, from the desert in Albuquerque, New Mexico, to the lakeside in Cleveland, Ohio, and several stops in between, eventually settling near Annapolis, Maryland. Brigid started writing in high school, and her first real “novel” was about four vampire brothers causing a ruckus in the suburbs. Those four brothers are the same boys living in the pages of The Elemental Series, so Brigid likes to say she’s had four teenage boys taking up space in her head for the last seventeen years. (Though sometimes that just makes her sound nuts.)

Brigid writes anywhere she can find a place to sit down (and she’s embarrassed to say a great many pages of The Elemental Series were written while sitting on the floor in the basement of a hotel while she was attending a writers’ conference). Most writers enjoy peace and quiet while writing, but Brigid prefers pandemonium. A good thing, considering she has three boys in the house, ranging in age from an infant to a teenager.

While writing STORM, it’s ironic to note that Brigid’s personal life was plagued by water problems: her basement flooded three times, her roof leaked, her kitchen faucet broke, causing the cabinet underneath to be destroyed by water, the wall in her son’s room had to be torn down because water had crept into the wall, and her bedroom wall recently developed a minor leak. Considering SPARK, book 2 in the series, is about the brother who controls fire, Brigid is currently making sure all the smoke detectors in her house have batteries.

Brigid loves hearing from people, and she probably won’t refer to herself in the third person like this if you actually correspond with her. She has a smartphone surgically attached to her person nearby at all times, and email is the best way to reach her. Her email address is brigidmary@gmail.com.