UFI welcomes Author Jessie Mihalik. Thanks for Joining us!!

I’m an introvert. I have a book signing coming up and I’m so nervous because I’ll have to stand up in front of a group of people and hopefully be entertaining. So if you’re ever nervous when you meet your favorite author, don’t worry—they might be nervous to meet you, too!

Overall, I’m a huge nerd. I love to play video games in my down time, especially co-op games with my husband. We’re currently playing Fallout 76, and despite the mediocre reviews, we’re having a blast. I also love to play board games with friends. And I read, of course, as I think all writers do. I also try to get outside and hike or run when the weather is nice.

I love the creative aspect of writing. I get to make up entire worlds and invite readers into them. And I get to create two characters who are perfect for each other, but who don’t always see it from the beginning, and then get them together.

No, I don’t have any required routines.  I generally have a vague idea of where I’m going in a particular scene and I sit down and figure out how to get there. I don’t plot far ahead, which sometimes gets me in trouble, so I tend to go back and tweak previous scenes as I’m writing. Then, once I’m finished, I do a final pass revision or two before I send it off to my beta readers or editor.

For urban fantasy, I love the Mercy Thompson series by Patricia Briggs, the Kate Daniels series by Ilona Andrews, and the October Daye series by Seanan McGuire, and Trail of Lightning by Rebecca Roanhorse. For science fiction, I love the Dred Chronicles series by Ann Aguirre, Fortune’s Pawn by Rachel Bach, and The Murderbot Diaries series by Martha Wells.


How would you pitch POLARIS RISING to someone who has not heard of it before?

When space princess Ada von Hasenberg is captured and thrown into a cell with outlaw soldier Marcus Loch, she fears she won’t escape in time to prevent the mercenaries from returning her to Earth—and her imminent arranged marriage. But when their ship is attacked by a battle cruiser from rival House Rockhurst, Ada knows she has bigger problems. She offers Loch a fortune to help her escape, but can she really trust the man known as the Devil of Fornax Zero?

Can you tell us a little bit about the world that POLARIS RISING is set in?

Polaris Rising is set in the far distant future. Humans have figured out faster than light travel and have spread across the universe. The universe is ruled by the Royal Consortium, a government made up of various houses, but the three High Houses wield the most power. Ada, the main character, is the fifth of six children of High House von Hasenberg.


Do you have a favorite scene in POLARIS RISING?

I have a lot of favorite scenes, but the one that’s closest to my heart is the opening scene. The idea of a woman fighting mercenaries as they tried to wrestle her onto their ship in order to collect her bounty had floated around in my head for weeks, but I had ignored it in an attempt to write a different book. Once I finally gave in and wrote it, the rest of the book just poured out.

I loved writing Ada because she was my first science fiction heroine. She’s smart and competent and refuses to let others push her around, but she also knows when she needs help and reaches out to her friends for support. The hardest was probably Richard Rockhurst because, in his mind, he’s the hero, but we only see him from Ada’s perspective.

Aurora Blazing, book two of the Consortium Rebellion, comes out in October, and book three is scheduled for next year. On my blog, I’m posting chapters of The Queen’s Advantage, a free space opera serial novella set it in its own world. It’s the sequel to The Queen’s Gambit that I also serialized first and then self-published. 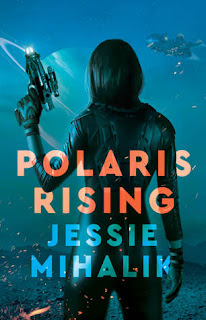 
A space princess on the run and a notorious outlaw soldier become unlikely allies in this imaginative, sexy space opera adventure—the first in an exciting science fiction trilogy.

In the far distant future, the universe is officially ruled by the Royal Consortium, but the High Councillors, the heads of the three High Houses, wield the true power. As the fifth of six children, Ada von Hasenberg has no authority; her only value to her High House is as a pawn in a political marriage. When her father arranges for her to wed a noble from House Rockhurst, a man she neither wants nor loves, Ada seizes control of her own destiny. The spirited princess flees before the betrothal ceremony and disappears among the stars.
Ada eluded her father’s forces for two years, but now her luck has run out. To ensure she cannot escape again, the fiery princess is thrown into a prison cell with Marcus Loch. Known as the Devil of Fornax Zero, Loch is rumored to have killed his entire chain of command during the Fornax Rebellion, and the Consortium wants his head.

When the ship returning them to Earth is attacked by a battle cruiser from rival House Rockhurst, Ada realizes that if her jilted fiancé captures her, she’ll become a political prisoner and a liability to her House. Her only hope is to strike a deal with the dangerous fugitive: a fortune if he helps her escape.

But when you make a deal with an irresistibly attractive Devil, you may lose more than you bargained for . . . 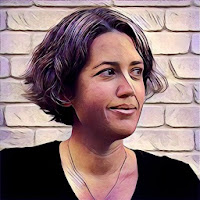 Jessie Mihalik has a degree in Computer Science and a love of all things geeky. A software engineer by trade, Jessie now writes full-time from her home in Texas. When she’s not writing, she can be found playing co-op video games with her husband, trying out new board games, or reading books pulled from her overflowing bookshelves. Polaris Rising is her debut novel.