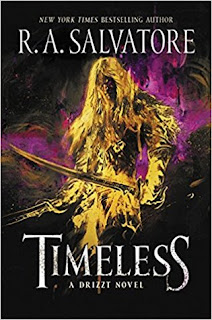 
At long last, New York Times bestselling author R. A. Salvatore returns with one of fantasy's most beloved and enduring icons, the dark elf Drizzt Do'Urden, in an all-new trilogy full of swordplay, danger, and imaginative thrills,

Centuries ago, in the city of Menzoberranzan, the City of Spiders, the City of Drow, nestled deep in the unmerciful Underdark of Toril, a young weapon master earned a reputation far above his station or that of his poor house.

The greater nobles watched him, and one matron, in particular, decided to take him as her own. She connived with rival great houses to secure her prize, but that prize was caught for her by another, who came to quite enjoy the weapon master.

This was the beginning of the friendship between Zaknafein and Jarlaxle, and the coupling of Matron Malice and the weapon master who would sire Drizzt Do’Urden.

R. A. Salvatore reveals the Underdark anew through the eyes of Zaknafein and Jarlaxle—an introduction to the darkness that offers a fresh view of the opportunities to be found in the shadows and an intriguing prelude to the intriguing escapes that lie ahead in the modern-day Forgotten Realms. Here, a father and his son are reunited and embark on adventures that parallel the trials of centuries long past as the friends of old are joined by Drizzt, Hero of the North, trained by Grandmaster Kane in the ways of the monk.

But the scourge of the dangerous Lolth’s ambitions remain, and demons have been foisted on the unwitting of the surface. The resulting chaos and war will prove to be the greatest challenge for all three.

Thirty years ago, R. A. Salvatore created the character of Drizzt Do’Urden, the dark elf who has withstood the test of time to stand today as an icon in the fantasy genre. His novels in the Forgotten Realms, Crimson Shadow, DemonWars, and other series, have sold more than thirty million copies worldwide and have appeared on the New York Times bestseller list more than two dozen times. He splits his time between Massachusetts and California, with his wife, Diane, and their three dogs, Ivan, Pikel, and Dexter. He still plays softball for his team, Clan Battlehammer, and enjoys his weekly DemonWars:RPG game.