UFI welcomes Cyndi Tefft Author of Between. Thanks for Joining us!! 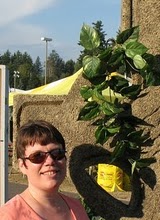 I didn’t see a Bio on your blog so what can you tell my readers about yourself?
I live in the Pacific Northwest where the weather is mostly cool and rainy (so I have a great tan, as you can imagine). I am a self-proclaimed Scot freak and in love with all things Scottish: the kilts, the accents, the bagpipes, the caber tossing, the haggis… well, okay not the haggis. One of my prized possessions is a dirk with a glass hilt that I bought at our local Scottish Highland games.
What is your Favorite part of writing?
I love playing the ‘what if’ game in my head with the characters, brainstorming about what might happen next and how they’d react. They take on a real life of their own when you’re writing and it’s fun to spend time with them, to get to know their idiosyncrasies.
Do you have any certain routines you must follow as you write?
Classical music is usually playing on the laptop while I’m writing. Brian Crain is my favorite piano player and I’ve listened to his Sienna album approximately 1,723,971 times by now (you know, give or take)!
What are some of your Favorite books or Authors in the Young Adult Genre?
Personally, I’m a little vampired out right now, but two of my favorite YA authors are Stephenie Meyer and Richelle Mead. The Twilight series actually inspired me to try my hand at writing a novel. Stephenie seemed like a normal person when I watched a video of her and I figured if she could do it, maybe I could, too. As for Richelle, her Vampire Academy series is just non-stop action with fantastic characters.
How would you pitch Between to someone who has never heard of it before?
Between is a love story between a girl who dies in a car accident and the 18th century Scottish Highlander who comes to take her to heaven.
Can you tell us a little bit about the world that Between is set in?
In the realm between heaven and earth, Lindsey and Aiden are able to “cast” their environment: they imagine what they want to see and it appears around them. They can also cast a memory and the scene plays out before them just like it had when they were alive, only they can’t interact with the people. In this way, Aiden is able to take Lindsey on a whirlwind trip through 18th century Europe and she is able to show him her home  in Seattle, 300 years beyond his time. In creating the realm in between, I loved being able to incorporate time travel elements and define a world that is familiar in some ways, but filled with endless opportunities.
Which character was your favorite to write about? What about the hardest to write
about?
Aiden was definitely my favorite character (see the earlier answer about my love of all things Scottish). I think all girls like to fantasize about the perfect guy, so it was fun being able to make him say and do exactly what I wanted! Lindsey was harder to write about, as it took a little while for her character to really solidify in my head. Since it’s written in the first person point of view, it was easy to see others through her eyes, but I had to work at showing how others saw her.
What Other Projects can we look forward to reading from you?
After the launch of Between, I will jump into finishing the sequel. The first draft is about a third of the way done already, but I haven’t looked at it in a while. I’m excited about spending more time with Aiden and Lindsey, and fleshing out the next chapter for them! 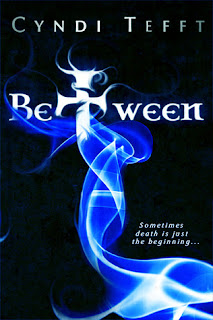 It just figures that the love of Lindsey Water's life isn't alive at all, but the grim reaper, complete with a dimpled smile and Scottish accent.

After transporting souls to heaven for the last 300 years, Aiden MacRae has all but given up on finding the one whose love will redeem him and allow him entry through the pearly gates.

Torn between her growing attraction to Aiden and heaven's siren song, Lindsey must learn the hard way whether love really can transcend all boundaries.

Thank you to everyone that entered!!
PRIZE: Your choice of ANY 1 book valued Up to $10USD from Book Depository.
*US residents- I reserve the right to order your book from a US book store*

Congrats!! I have emailed winner who has 48 hours to respond with mailing address or I will pick another.
Posted by StacyUFI at 2:02 AM No comments: