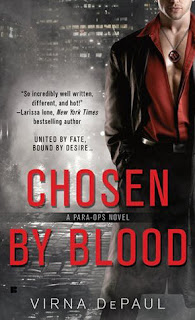 United by fate. Bound by desire.
Five years after the Second Civil War ends, humans and otherborn— humanlike creatures with superhuman DNA—still struggle for peace. To ensure the continued rights of both, the FBI forms a Para-Ops team with a unique set of skills.

Leader of an Otherborn clan, half-breed vampire Knox Devereaux would do anything to find a cure for the anti-vamp vaccine slowly starving his people into extinction. When the FBI contacts him about leading a team of hand-selected Others on a mission to reclaim the stolen antidote, Knox accepts. His new assignment places him in direct contact with Special Agent Felicia Locke, the beautiful human he’s craved since their very first meeting.

CHOSEN BY BLOOD was an excellent series opener. Felicia and Knox have a forbidden love type relationship. They both want each other so badly it hurts but neither is willing to give up things they need to make a go at it. The plot had me from the beginning, I started reading it because I had a bit before I went to bed and I told myself I would read the first chapter to see if its something I could get into... HA 2 hours later I still didn't want to put the book down even though my eyes felt like they were ready to fall out of my head. Every scene and situation flowed perfectly around and through each other. So much happened between the pages but I never once felt rushed or that it lacked depth. The characters were well written easy to like and get to know. I found I had no problems getting mad or frustrated with certain stubborn people as they tried to work through there issues. The romance was well written and the sex scenes once they happen were super hot. The ending has some great action and wraped things up nicely while leaving room for future books. I wish Virna would continue the story with Felicia and Knox as the main characters but It feels like this will be a series with different main people in each book. Fair warning once you pick it up you wont want to put it down.