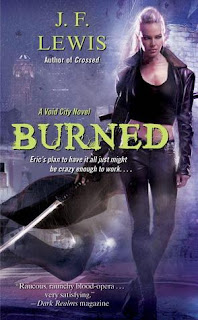 
Void City's resident badass vampire has a secret to keep, everything to lose, and a plan to win it all. Eric has taken control of the city's supernatural hierarchy, putting all the deals and contracts that allow Void City to function up for renegotitation. When he installs his insane vampire daughter, Greta, as Void City's sheriff of the supernatural, bloody mayhem ensues.


To further complicate things, the love of Eric's life is back from the dead, immortally young, at a cost that has put Eric under the thumb of a very powerful demon. The mysterious mouser Talbot, morose mage Magbidion, and all of Eric's thralls are trying to help him keep things under control...


But with early onset Alzheimer's, vampire hunters, demons, a band of chupacabra, a cursed cousin with a serious grudge, and Rachel as his new "handler"... there's just not an app for that.