Review: Beauty of the Beast by Rachel L. Demeter 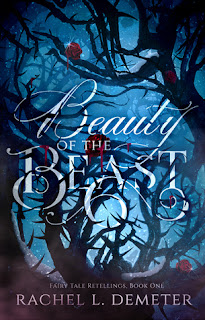 
Experience the world’s most enchanting and timeless love story—retold with a dark and realistic twist.

A BEAST LIVING IN THE SHADOW OF HIS PAST

Reclusive and severely scarred Prince Adam Delacroix has remained hidden inside a secluded, decrepit castle ever since he witnessed his family’s brutal massacre. Cloaked in shadow, with only the lamentations of past ghosts for company, he has abandoned all hope, allowing the world to believe he died on that tragic eve twenty-five years ago.

A BEAUTY IN PURSUIT OF A BETTER FUTURE

Caught in a fierce snowstorm, beautiful and strong-willed Isabelle Rose seeks shelter at a castle—unaware that its beastly and disfigured master is much more than he appears to be. When he imprisons her gravely ill and blind father, she bravely offers herself in his place.

BEAUTY AND THE BEAST

Stripped of his emotional defenses, Adam’s humanity reawakens as he encounters a kindred soul in Isabelle. Together they will wade through darkness and discover beauty and passion in the most unlikely of places. But when a monster from Isabelle’s former life threatens their new love, Demrov’s forgotten prince must emerge from his shadows and face the world once more…

Perfect for fans of Beauty and the Beast and The Phantom of the Opera, Beauty of the Beast brings a familiar and well-loved fairy tale to life with a rich setting in the kingdom of Demrov and a captivating, Gothic voice.


BEAUTY OF THE BEAST was a beautifully written twist on Beauty and the Beast—with a little bit of a Cinderella feel mixed in.

I was completely engrossed in BEAUTY OF THE BEAST from the beginning. You quickly get a feel for Isabelle's inner strength as she finds a way to take her ailing father and flee from the monster of a man she agreed to marry before he showed his true colors. A little of Isabelle's heart is shown when she tries to get her greedy step-sisters to come with her even though they make both her and her fathers life miserable to try and save them from poverty when they're gone. Her strong will makes an appearance when she approaches a castle in a snow storm and demands shelter for her and her ill father from the man that tries to turn them away. Adam is bitter due to the cards that he has been dealt in life. It took me a little bit to warm up to him, but his true colors start to bleed through as Isabelle awakens his heart and shows him how to live and trust again.

As a couple, Isabelle and Adam were amazing. They both had issues that had to be worked through, but both had a way of helping the other grow. I never doubted their connection or relationship—even though they both doubted it at multiple points throughout the story.

The world was fantastic. I'm not really a fan of historical settings, but I was so engrossed in the characters and storyline I hardly noticed. I loved every single second of BEAUTY OF THE BEAST and wish there was more story to read, but I was pleased with how things ended. I'm excited to see what story Rachel Demeter brings to life next.