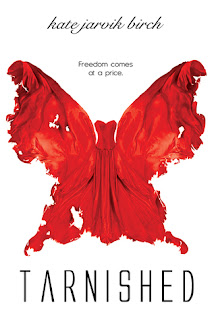 Freedom comes at a cost...

Ella was genetically engineered to be the perfect pet—graceful, demure...and kept. In a daring move, she escaped her captivity and took refuge in Canada. But while she can think and act as she pleases, the life of a liberated pet is just as confining as the Congressman’s gilded cage. Her escape triggered a backlash, and now no one's safe, least of all the other pets. But she's trapped, unable to get back to Penn—the boy she loves—or help the girls who need her.

Back in the United States, pets are turning up dead. With help from a very unexpected source, Ella slips deep into the dangerous black market, posing as a tarnished pet available to buy or sell. If she's lucky, she'll be able to rescue Penn and expose the truth about the breeding program. If she fails, Ella will pay not only with her life, but the lives
of everyone she's tried to save...


PERFECTED was an interesting book, but TARNISHED definitely stepped the series up another level.

Ella tended to annoy me in PERFECTED, but TARNISHED brought her out of her 'pet' shell. She goes from meek to fierce and her loyalty to those she cares about shines through in just about every situation. She still has a few sheltered girl moments, but when she catches up to the game, she totally redeems herself in my eyes.

The romance between Ella and Penn. It's missing the spark I would expect to feel and they don't really have time to grow a relationship in TARNISHED. You can tell they feel things for eachother, but it isn't quite there for me yet. Maybe book three will bring their relationship into another level that will make me feel like they are a couple.

TARNISHED really surprised me. I was hesitant to pick up a review copy and when I had it it took me a while to read it. Thankfully when I started reading it, I had no problem staying engaged and it made me want to continue the series. Not sure when book 3 will be out, but I will make sure to keep an eye out for it.