UFI welcomes Mary Abshire Author of Immortal Revenge. Thanks for Joining us!!

Two of my favorite scenes to write are fighting scenes and ones with a lot of dialogue. Both move a story forward quickly. Fighting scenes provide good visuals for readers and dialogue gives a reader a better impression of characters. Dialogue also can help provide details on a back story and be used to build various forms of tension. I love building tension, but I also like creating humor with dialogue.

When I first wrote a fight scene a few years ago I thought it would be difficult. It wasn’t. I visualized the scene and slowed it down in my mind to write it in words. For every action there is a reaction. I wrote my first fight scene in another book and readers continually said it provided a great visual for them. My response? Yay! I did it right. Keep in mind, I’m not an expert but the positive replies boosted my confidence.

In my new novel, Immortal Revenge, my protagonist, Katie, has several fighting scenes. I knew from the beginning she would have a few. She is human and has to fight the bad vampires, which means she has difficult challenges to face. But she is one determined woman. She can kick some ass and speed like crazy. Just ask her best friend and roller skating disco queen, Jules.

The dialogue between Katie and Jules was fun to write. Where Katie is more of a strong-minded person, Jules is more laid back. Except Jules is squeamish and Katie is the opposite. They are alike in some ways but different in many others, which helps these two women form a strong bond. Jules certainly brings light and humor to Katie’s dark and twisted life. 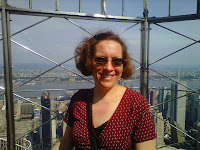 When I’m not slaving away at my government job, I’m a Paranormal Romance and Urban Fantasy Author. I creates fantastical worlds with vampires, demons, werewolves, and other supernatural creatures. Dive into my books and find action, a dash of mystery, and seductive men with passionate hearts.

Books in my urban fantasy series, Project Eve, include: The Awakening and The Quest
Midnight Gardens is my new paranormal romance series and the first book, Welcome to the Neighborhood, has a release date August 5, 2013.

Immortal Revenge is my new urban fantasy novel in The Legacy series. Release date is in November 2013.

Books in my paranormal romance series, The Soul Catcher, include: Claiming the Evil Dead, Catching an Evil Tail, Fighting Evil, and Love Conquers All Evil 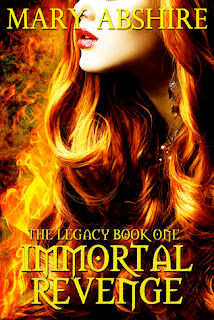 
Grief stricken Katie Dillinger is on a mission to claim revenge for the death of her lover. In a race against time to find the murderer, Katie reaches out to Riker, a man listed as her boyfriend’s emergency contact. The cold-hearted man comes to Katie’s aid, but she doesn’t completely trust him. To keep her friends safe, she insists they leave town immediately. But her efforts come too late. A friend disappears and a clear message is left in the wake: surrender or more people will die.

Katie’s world is turned upside down when she discovers Riker has vowed to protect her. She’s involved in a prophecy, one which her lover had been preparing her for before his murder. All the combat training he gave her suddenly makes sense, and as Katie fights to keep her friends alive, she’s forced to prioritize. Revenge now, saving mankind next.