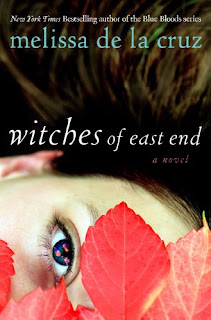 
It’s the beginning of summer in North Hampton, and beautiful Freya Beauchamp is celebrating her engagement to wealthy Bran Gardiner, the heir to Fair Haven and Gardiners Island. But Freya is drawn to Bran’s gorgeous but unreliable brother Killian, and sparks fly when the two decide to play a dangerous game, following an ancient story of love, betrayal and tragedy that harks back to the days of Valhalla.

Witches of East End follows the Beauchamp family—the formidable matriarch Joanna and her daughters Freya and Ingrid. Freya, a sexy bartender, has a potion to cure every kind of heartache, while Ingrid, the local librarian, solves complicated domestic problems with her ability to tie magical knots. Joanna is the witch to see when modern medicine has no more answers; her powers can wake the dead. Everything seems to be going smoothly until a young girl, Molly Lancaster, goes missing after taking one of Freya’s irresistible cocktails. As more of the town’s residents begin disappearing, everyone seems to have the same suspects in mind: the Beauchamp women.

Fraught with love, small-town secrets, and witchcraft, Witches of East End will capture any reader who craves a page-turning, heart-stopping story of myth and magic from an author who knows how to deliver.

Meh it wasn't for me and I had to force myself to finish it. I was kinda into the book in the beginning. All the Beauchamp sisters seemed to be interesting and easy to like. As the book went on and the characters became more developed I just found myself bored with everyone. The pacing was slow and a lot of the background and situations got confusing and I lost interest in the characters as more were added and I couldn't remember who was who and what they were to the story. I did like the town and the descriptions given as well as the imaginative magic that was being cast. All the little mysteries were interesting and most wrapped up nicely. As a whole I just didn't get into the book like I would have wanted to and wont be reading any more in the series.