UFI is pleased to welcome Robyn Bachar, Author of Blood Smoke and Mirrors. 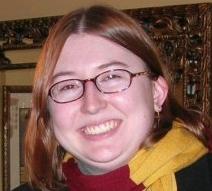 I'm a Shakespeare nut, and "A Midsummer Night's Dream" had a big influence on the faeries in Blood, Smoke and Mirrors. I even included a mention of troublemaking Shakespearean faeries in the warning for the book. I wanted to have faeries that wreak havoc and cause shenanigans in the human world, but only if they're left unchecked. Thus I created the role of Titania and Oberon in my setting—a political position held by a mortal magician, meant to keep the faeries from causing too much trouble in our world, and to keep magicians from abusing the magic in Faerie. My heroine Catherine Baker is a witch who tries to become Titania for the Midwest, spurred on by her faerie cousins Portia and Tybalt. Portia's character is also a bit of an in-joke for me, because in high school my freshman English teacher made us all memorize Portia's "the quality of mercy is not strain'd" speech from "The Merchant of Venice", so I made her bloodthirsty and vengeful. Portia also has a love of 80s punk fashion and game shows, but who doesn't?
To be honest, though, I didn’t do any research specifically for this book, because I’ve had a lifelong love of mythology and the paranormal. In college I took a course in ancient Irish mythology that was fascinating, and it definitely influenced my writing. In Blood, Smoke and Mirrors I wanted to include a little bit of everything that I love about urban fantasy, and I had a lot of fun doing it. I really enjoy working in this setting, and I have plans for more books in the series. Even a bad witch deserves a second chance.
Wrongly accused of using her magic to harm, the closest Catherine Baker comes to helping others is serving their coffee. Life as an outcast is nothing new, thanks to her father’s reputation, but the injustice stings. Especially since the man she loved turned her in.

Now the man has the gall to show up and suggest she become the next Titania? She’d rather wipe that charming grin off his face with a pot of hot java to the groin.

Alexander Duquesne has never faltered in his duties as a guardian—until now. The lingering guilt over Cat’s exile and the recent death of his best friend have shaken his dedication. With the murder of the old Titania, the faerie realm teeters on the brink of chaos. His new orders: keep Cat alive at all costs.

Hunted by a powerful stranger intent on drawing her into an evil web, Cat reluctantly accepts Lex’s protection and the resurrected desire that comes along with it. Lex faces the fight of his life to keep her safe…and win her back. If they both survive.

Robyn is giving away a $10 Amazon GC to the host with the most comments and a $20 Amazon GC to one randomly drawn commenter so make sure to leave a comment here and check out her other tour stops by clicking the banner above.