UFI welcomes Alex Hughes Author of The Mindspace Investigations Series. Thanks for Joining us!!

Alex: First off, thank you so much for having me on the blog! I appreciate.

What would people perhaps not know? I’m a huge geek and I research a lot of weird and interesting stuff. Strangulation rates in the US, for example. How to slip handcuffs. Bioluminescent trees being developed by an actual scientist right now. Korean business culture. Technology growth rates & the impact on people. You know, stuff.

I’m also getting into knitting in a big way lately. I’ve knit sweaters for myself and a hat (with a knitted attached beard) for my brother-in-law. Knitting is very soothing =)

Geek stuff is always fun – scifi and cop shows on TV (plus Faceoff and Project Runway), great video games I can play in 90 minute chunks (seriously, go buy The Wolf Among Us), and reading great books in and out of my field. I also like biking, yoga, eating at awesome restaurants, and hanging out with friends.

The moment (like in a good book) when it all falls away and the story starts fitting together in a beautiful way. When it becomes more than words on a page. It becomes a little reality for awhile. Getting there, of course, takes a *lot* of hard work, but it’s worth it.

Still playing around with things. Scheduled Butt in Chair time is very helpful, and having friends online for company and accountability for that writing time is also helpful. Sometimes I light a scented candle to tell my brain it’s time to work on particular project again. But mostly, I just have to sit down and do it.

The answer to this question changes depending on the day you ask me. Today, I’ll give a shout out to Laura Anne Gilman and Mercades Lackey (doing this well before Urban Fantasy was cool), Emma Bull, Jennifer Estep, Kelley Armstrong and Gail Carringer.

How would you pitch Mindspace Investigations Series to someone who has not heard of it before?

I call them telepath police procedurals. The series stars a telepath who’s a recovering addict working with the police in a future dystopic Atlanta to solve crimes. The first book is a serial killer who kills with the mind. In the third (and latest), the Telepath’s Guild asks him to solve a case with contagious madness. If you like cop shows, a close first person narrator, cool science, and telepathy, you’ll like it.

Can you tell us a little bit about the world that Mindspace Investigations Series is set in?

Sure. We open up on the world sixty years after the devastating Tech Wars, in which technology was highjacked to bring the world to its knees. The Telepath’s Guild stepped up to save it, but they had to get scary to do it—so the normals leave them alone and let them self-govern, but they are afraid. Here, now, there’s a fragile truce between the Guild and the normals. Also, although the world is still terrified of any computer technology more potent than an oven timer, biological and antigravity technology are still very much alive. So you get flying cars and artificial organs and all sorts of other fun goodies.

Why did you decide to use a male for the lead role in your series?

I had just read Joan D. Vinge’s Catspaw when I decided to write this series, and that main character is a male telepath, so it seemed natural. Also, his drug habit I think is a lot more socially acceptable than it would be in the same situation with a female narrator.

Do you have a favorite scene in Marked ?

I love a *lot* of this book, but one I’m particularly proud of is the flashback scene in the first twenty pages or so. I added it at the very last minute on the advice of my editor, and wrote it in one draft. We see Adam as a professor in the Guild, and it makes sense. It was deeply fun to write.

Cherabino can both be very difficult and very helpful. The interaction between her and Adam when it’s working is awesome and makes the book work. When it’s struggling, though, it’s tough. Also, Adam needs quite a bit of motivation to get moving lately.

As of the first week of March, I just released a short story in Adam’s world (now available for purchase, link here*****.) I’m working on a suspense/ghost project with writing partner and friend Kerry Schafer this year, and I have two Secret Novel Projects and a Very Secret Other Project in the works I’m very excited about. Make sure you sign up for my email newsletter at http://www.ahugheswriter.com/email-signup, since subscribers will get all the information first. (And I release free non-Adam short stories to the list periodically.)

Alex Hughes, the author of the award-winning Mindspace Investigations series from Roc, has lived in the Atlanta area since the age of eight. She is a graduate of the prestigious Odyssey Writing Workshop, and a member of the Science Fiction Writers of America and the International Thriller Writers. Her short fiction has been published in several markets including EveryDay Fiction, Thunder on the Battlefield and White Cat Magazine. She is an avid cook and foodie, a trivia buff, and a science geek, and loves to talk about neuroscience, the Food Network, and writing craft—but not necessarily all at the same time! 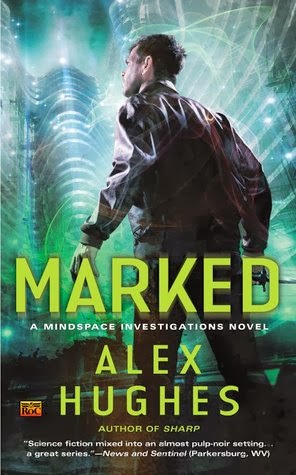 Freelancing for the Atlanta PD isn’t exactly a secure career; my job’s been on the line almost as much as my life. But it’s a paycheck, and it keeps me from falling back into the drug habit. Plus, things are looking up with my sometimes-partner, Cherabino, even if she is still simmering over the telepathic Link I created by accident.

When my ex, Kara, shows up begging for my help, I find myself heading to the last place I ever expected to set foot in again—Guild headquarters—to investigate the death of her uncle. Joining that group was a bad idea the first time. Going back when I’m unwanted is downright dangerous.

Luckily, the Guild needs me more than they’re willing to admit. Kara’s uncle was acting strange before he died—crazy strange. In fact, his madness seems to be slowly spreading through the Guild. And when an army of powerful telepaths loses their marbles, suddenly it’s a game of life or death.…