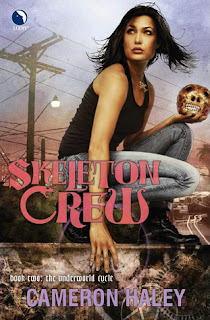 
Bodies are hitting the pavement in L.A. like they always do, but this time they're getting right back up, death be damned. My mobbed-up outfit of magicians may be the strongest in the city, but even they aren't immune to the living dead.

And I've yet to develop a resistance to Adan Rashan.

If I don't team up with the boss's son, we won't just be at each other's throats over control of the outfit. We'll be craving hearts and brains, as well.

Because as long as this nasty spirit from the Between is stopping souls from finding peace, I'm facing the biggest supernatural crisis to ever hit the City of Angels.

Zombies, it's time you feared me.

I was much happier with the pacing in SKELETON CREW. Things happened quicker and the slow parts were few and far apart. Domino is her kick butt, snarky, smart ass self. She continues to see what her juice can do to protect her and the things she feels need protecting.  Her allies and friends are at her back as they fight to figure out why everyone who dies turns into zombies. Some friends and allies are lost. There is tons of action spaced throughout the book. The romance is very slim so dont expect much in that department if that is what your looking for. The imagination and creativity is just as high in book 2 as it was in MOB RULES. There is plenty of zombie action for all you zombie lovers. The ending event made me sad :( I was really hoping something would come of the situation. Hopefully its not the end of that character and Cameron is just tricking us. Im glad I won a copy of Skeleton Crew or I wouldn't have found this series. I'm going to continue with Domino's story.

Posted by StacyUFI at 6:00 AM No comments: