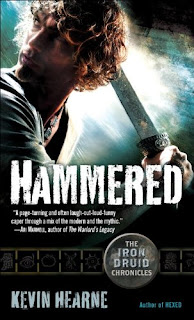 Thor, the Norse god of thunder, is worse than a blowhard and a bully—he’s ruined countless lives and killed scores of innocents. After centuries, Viking vampire Leif Helgarson is ready to get his vengeance, and he’s asked his friend Atticus O’Sullivan, the last of the Druids, to help take down this Norse nightmare.

One survival strategy has worked for Atticus for more than two thousand years: stay away from the guy with the lightning bolts. But things are heating up in Atticus’s home base of Tempe, Arizona. There’s a vampire turf war brewing, and Russian demon hunters who call themselves the Hammers of God are running rampant. Despite multiple warnings and portents of dire consequences, Atticus and Leif journey to the Norse plain of Asgard, where they team up with a werewolf, a sorcerer, and an army of frost giants for an epic showdown against vicious Valkyries, angry gods, and the hammer-wielding Thunder Thug himself.

HAMMERED felt a lot different then the first two Iron Druid Chronicles books. Everyone and everything was way more serious and intense. I had a  bit of a hard time getting into it at first but after the first couple chapters I was able to connect more with the story and get back into my Atticus reading groove. Atticus is determined to accompany and help Leif and a handful of others to Asgard to kill Thor no matter how many people tell him its a horrible idea and that there will be huge consequences. We lose a few people that have grown on us, we meet some new people, and we also get some great information from Leif about his life. As with all of Kevin's books, there is some great action scenes, Humor with our favorite hound, descriptive and imaginative locations and plenty of mythology thrown into the mix. The book ends way to soon with a bunch of stuff way up in the air and major drama happening but thankfully Kevin will be continuing the series in at least 3 more books, two of which will release in May of 2012.