UFI welcomes Felicity Heaton Paranormal Romance Author who is here to talk about her newest release Ascension. Thanks for Joining us!!

I have always loved everything paranormal from a very early age, but normally my writing focuses on vampires, werewolves, and shape-shifters rather than the magical side of things. With my new series, the Shadow and Light Trilogy, I’m tackling witches head on as well as a healthy dose of demon.
Ascension is the first book in the Shadow and Light Trilogy, and centres around Lealandra, a powerful witch on the verge of her ascension, a time when the magic that lives within her will reach the pinnacle of its power and mature. Her odds of surviving are slim to start with since most witches fall prey to the magic during their ascension, but they’re dramatically lessened by the fact that someone is intent on killing her. Lealandra turns to the one man she can trust—her half-demon ex- lover and demon hunter, Taig. Taig is the son of a powerful demon from the underworld, and he has serious issues with his demon lineage and that side of himself, enough that he’s never revealed his demonic appearance to Lealandra and can’t bring himself to believe that she could love a monster like him. When Lealandra appears back in his life after six years apart and asks for his assistance and protection, he wants something in return—her.
I love to world build and the Shadow and Light Trilogy offered me a great chance to flex my imagination. I believe that when you’re dealing with the supernatural and the occult, things that we’ve maybe all dreamed about being able to do in the past, like magic, then it’s important to put as much effort as possible into making it real and bringing it all to life for the readers. Magic comes to life in this series, literally. It’s a symbiotic being that lives within a witch, and each witch bloodline is suitable for a different breed of magic. The blood that runs in Lealandra’s veins is suitable for old magic, the sort that has lived for thousands of years passing from one host to another, gaining strength, knowledge and power the whole time. It’s so strong that it takes more than just her Counter-Balance, a weaker witch who acts like her partner and siphons off and absorbs some of her power to feed their own magic and strengthen it, to give her total control over it and has base desires that demand an intoxicating mixture of three things from Taig—his blood, his body and his power. Taig’s demonic blood is enough to give Lealandra a hell of a rush and bring her magic to its knees, turning it submissive. His power can control hers too because it will bow to a superior force of nature, making Taig the perfect match for her, even if witches and demons are at war with each other and their love is forbidden.
The magic in the Shadow and Light Trilogy has its foundations in the elements, so things like water and earth can boost a witch’s power and feed their magic. They can cast spells that will silence their opponent and stop them from being able to cast one in return, or will bind a witch so it can’t use a physical attack, or cause crippling pain. They can also use their power to teleport or heal, or create destruction on a widespread scale if their magic knows such a dangerous spell. It’s not about witches knowing the right words in this series. It’s about the magic knowing them. Magic is a separate being from the witch, living inside their blood and their body, using them as a vessel but living alongside them too and sharing its power with them. They learn together and can help each other grow stronger. The ascension is the ultimate step in this process, a point at which the witch’s magic reaches the peak of the power it can achieve with them and ascends to a new level. It’s also the most dangerous time for the witch. Not only is there a slim chance of surviving, but their blood is particularly valuable to other witches and creatures at that point, and they can also lose control of their magic before the ascension has even begun and become its marionette. I’ve tried to think of everything with this series and have put thought into describing the magic when it’s used and the relationship it has with its host, as well as all the little things that make up the world in which the series is set.
As the series progresses, I’ll venture further into the magical side of the world as well as bringing out more about the powers that Taig and other demons possess, such as their ability to call a world full of shadows eager for the taste of human flesh and the tang of witch magic on their black tongues into ours. Each book will build on the world of the witches and world of the demons as they come crashing together in the wake of Lealandra and Taig progressing relationship.
So if you’re a reader looking for an action-packed, magical and passionate urban fantasy romance with a difference, then head on over to my website and check out the excerpt of Ascension: http://www.felicityheaton.co.uk
Ascension is available now in e-book format direct from my site, on Amazon Kindle, and other retailers, and will be available next month in paperback.
__________________________________

Author Bio: Felicity Heaton is a romance author writing as both Felicity Heaton and F E Heaton. She is passionate about penning paranormal tales full of vampires, witches, werewolves, angels and shape-shifters, and has been interested in all things preternatural and fantastical since she was just a child. Her other passion is science-fiction and she likes nothing more than to immerse herself in a whole new universe and the amazing species therein. She used to while away days at school and college dreaming of vampires, werewolves and witches, or being lost in space, and used to while away evenings watching movies about them or reading gothic horror stories, science-fiction and romances.

Having tried her hand at various romance genres, it was only natural for her to turn her focus back to the paranormal, fantasy and science-fiction worlds she enjoys so much. She loves to write seductive, sexy and strong vampires, werewolves, witches, angels and alien species. The worlds she often dreams up for them are vicious, dark and dangerous, reflecting aspects of the heroines and heroes, but her characters also love deeply, laugh, cry and feel every emotion as keenly as anyone does. She makes no excuses for the darkness surrounding them, especially the paranormal creatures, and says that this is their world. She’s just honoured to write down their adventures. 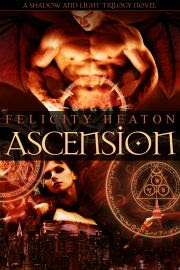 A witch on the verge of achieving phenomenal power, Lealandra must turn to her half-breed demon ex-lover Taig for protection from the dark force that is after her and also from her own magic.

With her Counter-Balance dead and her coven against her, Taig’s blood and power is the only thing that can help her control her magic and survive the ascension and gain the strength to defeat her enemy.

Old feelings come flooding back as Taig allows her into his world and Lealandra finds herself fighting not only for survival but to win his broken heart again and heal the pain in their past. Can he forgive her for walking out on him all those years ago and will he ever believe her when she tells him that he’s not a monster but the man that she loves?

Read the excerpt or find out where to buy: http://www.felicityheaton.co.uk/

Winner will receive
- One e-Copy of Ascension

RULES
1)  Leave a question or Comment for Felicity =)
2) Must leave an email address so I can contact you.

Giveaway Ends  5/18/2011 at 10pm EST
Winner will have 48 Hours to reply to my email or I will pick another
Winner chosen randomly with the help of random.org
Posted by StacyUFI at 3:00 AM 11 comments:

Thank you to everyone that entered!!
PRIZE: One copy of Tangled Threads by Jennifer Estep


Congrats!! I have emailed winner who has 48 hours to respond with mailing address or I will pick another.
Posted by StacyUFI at 2:59 AM No comments: