Promo + Early Review + GIveaway: Dragons Against Them by Kyra Jacobs 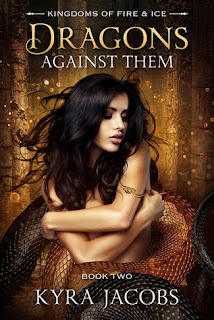 Blood is thicker than water…but can it melt a heart of ice?

Adelaide Miller gave up everything she knows to remain in Prince Zayne Godfrey’s alternate reality and assume her rightful place as eldest princess in the rival kingdom of Forath.

For an independent, free-spirited woman, however, royal life isn’t all it’s cracked up to be. In fact, it’s downright smothering. Especially since the vengeful Rosalind has gone AWOL.

Zayne is eager to wed Princess Addie—but their fathers seem more intent on keeping them apart. The longer Rosalind goes missing, the more suspicious each monarch becomes that the other is guilty of foul play.

But both kingdoms may soon face a strong, new rival intent on gaining power foretold by an ancient prophecy. To protect their chance at happily ever after, Zayne and Addie must partner with unlikely allies to save the one person intent on destroying them both.

But victory will not come without a price, and in the end, someone may have to pay—in blood.

After the ending of DRAGONS AMONG THEM I was left wondering what would happen between Addie and Zayne, so it was a no-brainer when I had the chance to snag a review copy of DRAGONS AGAINST THEM.

I'm not usually a fan of multiple POVs in my books, but Jacobs did a good job of making me feel like I was getting the full story even when I was in another person's head. Addie and Zayne were just as interesting to me in book two as I found them in book one, but DRAGONS AGAINST THEM covered a lot more than there budding relationship. We were introduced to a whole new aspect of the overall storyline and new characters jumped into the mix. I can't say that I loved everything about book two, but I liked it enough that I was easily able to stay in the story and I actually ended up liking a character that I hated in DRAGONS AMONG THEM.

I'm very interested in seeing where things will go next after the ending of DRAGONS AGAINST THEM, and not just for Adelaide and Zayne. There are still a lot of possible ways that the series can go with book three. I have a lot of questions and really want to dive deeper into some of the things that were prophesied in DRAGONS AGAINST THEM.


“…How long has it been since you stretched your wings, went on a leisurely flight?”
Tristan bristled. “I am unfamiliar with your customs in Edana, Prince Zayne, but here in Forath, those responsible for protecting our kingdom have little time for leisure.”
“A pity, that.”
“How so?”
Zayne bent to press a kiss upon his betrothed’s hair. Its silken strands tickled his chin, and her scent washed over him anew. His enjoyment in the continued battle of wits with her prick of a brother waned and was replaced by the desire for a new activity. One that involved himself, Adelaide, and far less clothing.
As if reading his mind, she shifted against him, teasing his length. Had they been alone, the temptation to take her now, here in the stables, might have been too great to resist. The thought of her naked body stretched out willingly beneath him spurred Zayne to cease his battle of words and hasten their retreat.
“Because to fly often is not only good for the soul, but also serves to strengthen your wings and keep your battle skills keen.”
“Of course. But as Adelaide cannot fly, she need not join you. It is her studies that should be my sister’s primary focus prior to your upcoming wedding.”
“Then I shall tutor her on your family’s lineage while we are away, as I am well versed in the subject.” He leaned down farther, pressing a kiss to the hollow beneath her ear. She shivered in his arms as he murmured, “A few hours is all it should take.”
“It won’t take anywhere near that long,” Addie whispered.
Her breathy, musical voice spoke to the beast within. Three days was all that had passed since he’d seen her last, yet it seemed an eternity. His bed had felt empty, her soft skin achingly absent alongside his. Zayne took several more steps toward the door, guiding her with him. Tristan, however, continued to follow.
"I have every confidence in your tutoring skills, Prince Zayne, but my father issued strict orders that Princess Adelaide shall not leave the grounds unaccompanied."
Addie tensed in Zayne’s arms. Of course a decree limiting her travels would create such a reaction in his free-spirited nymph. When they first met a few short weeks ago, she had been traveling alone. To now be restricted by King Jarin’s rules was undoubtedly difficult for her.
Ah, but he had ways to help ease her mind from these anxieties. Ways his body craved as much as the next breath. “An understandable decree, and one I pledge to uphold as her royal escort.”
“That is Blackstone’s assignment,” Tristan said. “Not yours.”
“Please, Tristan,” said Addie.
“Is Blackstone no longer your personal guard, then, my lord?” asked Zayne.
Tristan’s eyes narrowed and remained fixed upon him, ignoring his sister’s plea. “He has been assigned to protect the royal family, Adelaide included.”
“A difficult task when the prince and princess are in different locations, is it not?”
“Indeed. But as we are both here at the present, I feel he is quite capable of offering protection to us both.”
“I have no doubt in his abilities.” Zayne gripped Adelaide tighter with one hand and shoved the stable’s rear door wide with his other. “Unfortunately for you, the present has now passed.”
As he summoned his transformation, the air around them began to whip and swirl, masking their escape in a cloud of dust and straw. The beast within wasn’t to be denied, and not a soul in Forath Castle could stop them. In an instant, they were airborne, Adelaide safe and secure in his taloned grasp. 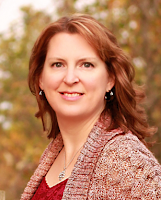 Kyra Jacobs is an extroverted introvert who writes of love, humor and mystery in the Midwest and beyond. When this Hoosier native isn’t pounding out scenes for her next book, she's likely outside, elbow-deep in snapdragons or spending quality time with her sports-loving family. Kyra also loves to read, tries to golf, and is an avid college football fan. Be sure to stop by her website www.KyraJacobs.wordpress.com to learn more about her novels and ways connect with her on social media.