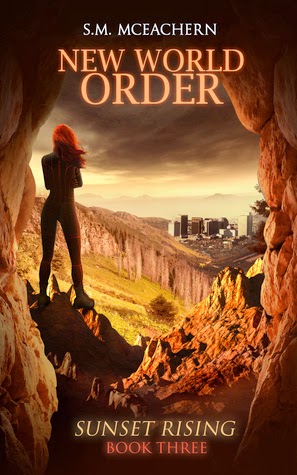 The Biodome has been liberated, the slaves have been freed, and a new democratic government has been formed. Yet tensions between the Pit and the Dome have never been higher. With the disappearance of Senator Jack Kenner, the old regime makes a political move to reestablish their government.

In the third book of the Sunset Rising trilogy, Sunny O’Donnell is determined to find Jack and bring him home. With the high-tech assistance of Doc, Sunny and her friends, Summer and Reyes, team up with the Nation to set out into a lawless post apocalyptic world. But as the ruthlessness of the recruiters unfolds amidst the discovery of betrayals within their own group, friends will become enemies and enemies will become friends on a journey that will lead to a New World Order.


*Warning: Hints about events in previous books and minor spoilers might be included in this review*

We were dropped into a cliffhanger at the end of book 2, WORLD'S COLLIDE, and I couldn't wait to see how Sunny would handle getting Jack back while also dealing with the news she received in the last few pages. It's a bit hard to write this review because I don't want to give anything away, but there is still things I would love to talk about.

Sunny and Jack were never supposed to be together, but their love is strong and it's clear they were meant for each other. No matter what Sunny thought, there is still a lot of tension and prejudiced between the former pit and dome residents. She slowly came to realize the issues throughout NEW WORLD ORDER and once she saves Jack things kinda blow up on that front. I don't think the blow up was as big as it could have been, and watching her and Jack work together to resolve the conflict instead of one or the other doing it on their own brought it all together in the end and showed how much each of them have grown since book 1.

The characters were great, the storyline was easy to follow, flowed nicely and kept me wanting more. There was a nice mix of action, romance and suspense.  This trilogy started great and ended great, but I still want more! I thought the trilogy ended really well, but I still feel there is so much to explore and I am sad that this is the end. If you're looking for a new dystopian series to fall into, this is it!