UFI welcomes Author Marjorie Liu . Thanks for Joining us!!
What can you tell my readers about yourself that they might not know from looking on your bio or reading in another interview?

That’s always the hardest question for me to answer, because despite my presence on Twitter and my blog, I’m a rather private person. Also, I just can’t imagine I’m all that interesting. I knit, sometimes. I like to cook. But that’s not terribly exciting.

The danger of this answer is that if I don’t elaborate it all sounds like a cliché, but what I love is to read, travel, and just putter around the house. Really, whatever strikes my fancy. That’s the beautiful part of making my own hours.

There’s a burst of excitement and emotional resonance that hits when you start writing a book or short story. It’s a rush, some kind of high, centered right in your heart. Like falling in love, maybe.

None. The most important thing is to just sit down at the computer and set the wheels in motion.

I love so many. Just to name a few: Eve Silver and Lynn Viehl; Clay and Susan Griffith; Lynn Kurland; Patricia Briggs; and Laini Taylor.

How would you pitch the Dirk & Steele series to someone who has not heard of it before?

A detective agency filled with creatures out of legend – mermen, gargoyles, shape- shifters, psychics – use their gifts to protect others from powerful forces of evil.

It’s the same as our contemporary world, but with a magical underbelly that most people aren’t aware exists.

Do you have a favorite scene in Within the Flames?

I actually enjoyed myself while writing this book, which makes it difficult to pick out a single favorite scene. I can tell you, though, which scene was the hardest to work out – and that’s when Eddie and the heroine, Lyssa, meet for the first time. First meetings in my romance novels are always difficult to write, because so much rides on that initial chemistry. This time was no different.

Again, I’m a sucker for Eddie…but the heroine, Lyssa, who is a dragon shape-shifter, might beat him in the race for my favorite character to write about in this novel. Her vulnerability and strength, her fear of hurting others…spoke to me during the creation of the novel. She endures a terrible amount of isolation because she doesn’t believe she’s strong enough to control her own dangerous strength – and that lack of confidence in one so powerful fascinates me.

Within the Flames is the 11th book in the series. Have you found it harder or easier to write the books as the series gets longer?

That depends on the characters. Eddie and Lyssa’s story wasn’t nearly as difficult to tell as Dean and Miri’s (from The Red Heart of Jade), but Dela and Hari in Tiger Eye were probably the easiest of all to write, so far. I’m not sure why. Perhaps because it was the first book, and there was no pressure.

Besides the comic books (X-23, at the moment), which are released monthly, the next Hunter Kiss urban fantasy novel will hit shelves at the end of December. The Mortal Bone opens with Maxine celebrating her recent marriage – a celebration that lasts until tragedy befalls her. The ‘boys’ – demons who live on her skin as tattoos – are suddenly ripped away, bonds broken, leaving her defenseless and heartbroken. Zee and the demons are not just weapons, they’re family – and Maxine is forced to question whether or not their bonds of family are real, based in love – or just the product of their forced imprisonment on her skin.

To celebrate The Mortal Bone my publisher is releasing one of the Hunter Kiss novellas, “Armorof Roses”, as an e-special – bundling it with an original, never-before-published short story told from Grant’s point of view.

I was born around Philadelphia, spent my formative years in Seattle, and now reside in the Midwest. I went to Lawrence University in Appleton, Wisconsin, for my undergraduate studies, majoring in East Asian Languages and Cultures, with a minor in Biomedical Ethics. I then attended law school at the University of Wisconsin, graduated in May 2003, and was admitted to the bar a couple weeks after. I loved law school. Did not like being a lawyer. Which is why I decided to become a writer.
I’ve studied and traveled extensively through Asia, and spent some time working at the US Embassy in Beijing. I love to read, I love to write, but what I love best of all is proving to myself that dreams do come true.
Oh, and I like poodles. And cats.
__________________________________
Find Marjorie and her books
Website / Twitter / Facebook
__________________________________ 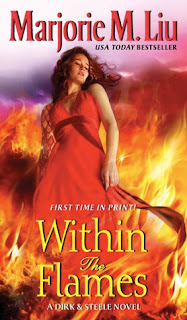 
Eddie is a pyrokinetic, a former car thief, and an agent of Dirk & Steele. He’s also recovering from a terrible illness that nearly killed him, and destroyed almost all his hard-won control over his powers. When he’s asked to go to New York City to investigate a string of murders, Eddie’s reluctant until he learns he’s also to search out a young woman who they suspect has similar powers over fire.

Lyssa is a shape-shifter, on the run for nearly a decade since her family was murdered. Afraid of hurting others with her wild flashes of power and magic, and in hiding from those who killed her loved ones, she has kept to the shadows living in the old tunnels beneath the streets of New York City. But when some of the homeless in her territory begin disappearing, Lyssa can’t let that slide. As she begins to look into the disappearances, she learns that her magical hunters are closing in, only this time, they’ve got help. And Lyssa has no one at all.

Until Eddie finds her. Uncertain she can trust him, Lyssa nonetheless finds herself drawn to Eddie, who offers not just his protection and friendship, but training in the use of her gift. But the price is steep. Being near her makes him a target. And not just him, but the entire Dirk & Steele agency.

FILL OUT FORM TO ENTER
Read more »
Posted by StacyUFI at 3:00 AM 13 comments: