Early Review: The Edge of Forever by Melissa E. Hurst 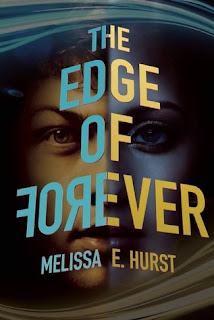 
In 2013: Sixteen-year-old Alora is having blackouts. Each time she wakes up in a different place with no idea of how she got there. The one thing she is certain of? Someone is following her.

In 2146: Seventeen-year-old Bridger is one of a small number of people born with the ability to travel to the past. While on a routine school time trip, he sees the last person he expected—his dead father. The strangest part is that, according to the Department of Temporal Affairs, his father was never assigned to be in that time. Bridger’s even more stunned when he learns that his by-the-book father was there to break the most important rule of time travel—to prevent someone’s murder.

And that someone is named Alora.

Determined to discover why his father wanted to help a “ghost,” Bridger illegally shifts to 2013 and, along with Alora, races to solve the mystery surrounding her past and her connection to his father before the DTA finds him. If he can stop Alora’s death without altering the timeline, maybe he can save his father too.

One problem I see a lot in time travel books and books with multiple POVs is that it can get a bit confusing as to when,where and to whom something is happening. I am happy to say that this did not the case in THE EDGE OF FOREVER, everything was very easy to follow.
I really enjoyed both points of views. Bridger, who is from the future, is thrust into the past trying to continue the work his father died trying to solve. He doesn't know who he can trust, but he is determined to save Alora. Alora keeps blacking out and finding herself in different places. She is pretty freaked out by this as you can imagine. When a mysterious boy finds his way to her aunts bed and breakfast she is drawn to him and befriends him pretty quickly even though she is usually a loner. She also has the issue of her past. She remembers nothing of her parents or the time before she came to live with her aunt. Her aunt will not tell her anything and that makes her more curious.

Together they search for their separate answers until they realize everything they are looking for is connected in some way to the future. There is a bit of romance between the two, but it's very slow going and kind of on the back burner of everything else that is going on. There is some good action tucked into a good pace and an interesting world.  Despite a few slow parts I found it easy to stay interested in the story.

I finished reading THE EDGE OF FOREVER with the feeling that the story isn't over, they seem to make that clear with the events at he end, so I will be on the lookout for information on book two.

* This book was provided free of charge from the Edelweiss in exchange for an honest review.
Posted by StacyUFI at 3:00 AM No comments: