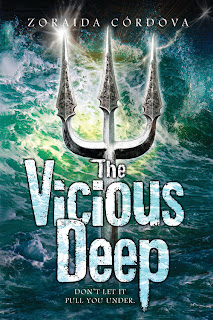 For Tristan Hart, everything changes with one crashing wave.

He was gone for three days. Sucked out to sea in a tidal wave and spit back ashore at Coney Island with no memory of what happened. Now his dreams are haunted by a terrifying silver mermaid with razor-sharp teeth.

His best friend Layla is convinced something is wrong. But how can he explain he can sense emotion like never before? How can he explain he’s heir to a kingdom he never knew existed? That he’s suddenly a pawn in a battle as ancient as the gods.

Something happened to him in those three days. He was claimed by the sea…and now it wants him back.


I have enjoyed many of the mermaid books out there lately and THE VICIOUS DEEP is just as good with a slightly different twist since the main character is actually a merman.

Tristan's voice throughout the book was easy to follow and fall into. His character was well portrayed and his story was eventful. Layla was my second favorite character and as Tristan's best friend she had a high place in the book. Tristan and Layla have been best friends forever and now have feelings for each other but neither is willing to throw that out there first. Tristan is known to his friends as some what of a man whore so its pretty entertaining watching him try to get Layla to see him as more then a friend. The whole relationship was frustrating and sweet at the same time. There were a lot of great characters thrown into THE VICIOUS DEEP that also helped bring the story out and you really cant help falling in love with all of them.


Lots of stuff is left in the air but THE VICIOUS DEEP was the first book in The Vicious Deep Trilogy and you can tell the whole series will be nothing but entertainment, suspense and action. I'm looking forward to Tristan's continued fight to find the final pieces of the Triton.