Interview & Review: Blood of the Demon by Rosalie Lario

UFI welcomes Rosalie Lario Author of Blood of the Demon. Thanks for Joining us!! 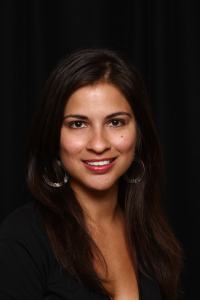 Although I have a fascination with the supernatural, I’m petrified of scary movies! Whenever I forget that and watch one, I won’t sleep well for weeks. Every little sound the house makes will send me into a fit of terror. The closest I’ll come to scary is something like The Haunted Mansion. (I know, it’s pathetic.)

Downtime, what’s that? LOL. There hasn’t been much of that lately, but given that I live in the Sunshine state, when I’m not writing I love to be on the water. Frankly, in the summertime, it’s too hot to be outside if you’re not on the water. Boating, swimming, playing at the beach: I count those among my favorite activities.

Every once in awhile I’ll hit a moment where I feel like I’m getting a glimpse into someone else’s life. I’m so involved in the story that it becomes real to me. That’s the best part.

I play a track featuring rain and thunder (with no background music). It’s silly, but I’ve gotten to the point where I’ll play the track even if there’s actual rain and thunder going on outside.

I absolutely love the world Jeaniene Frost has built in her Night Huntress series (and all its offshoots). I’ll follow her anywhere she deems to take me. Also Karen Marie Moning, though I’m more a fan of her Highlander series than the newer Fever series.

How would you pitch Blood of the Demon to someone who has not heard of them before?

It’s like Supernatural meets The Mummy with hot, half-demon brothers and lots of steamy romance.

Can you tell us a little bit about the world that Blood of the Demon is set in?

It’s set in current day New York City (and New Orleans and Egypt). In my world, there are multiple dimensions from which different species of beings derive (demons, shifters, vampires, fae: you name it). Inter-dimensional travel is governed by a political council of elders called the Elden Council. Though most humans don’t know it, New York City contains one of the portals allowing for travel between dimensions, and a lot of the people walking the streets aren’t at all human.

Do you have a favorite scene in Blood of the Demon?

The final battle scene in the Valley of the Kings (Egypt). I actually double-majored in Anthropology and Classical Studies as an undergraduate, so to say I have a fascination with Ancient Egypt would be an understatement. It was so fun to write a scene using the ancient monuments as a backdrop (though, sadly, my demons don’t seem to have too much regard for protecting ancient relics).

I fall in love with all of my heroes. It’s so interesting to see what makes them tick. The brothers in my series share a tortured past with an abusive demon father, but it affects them in different ways. That was a lot of fun to explore.

I’d say the hardest character to write about was Brynn. It took me some time to really figure out who she was. Once I did, I fell in love with her loyalty and bravery in the face of all odds. 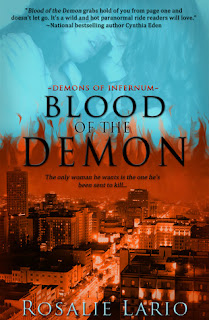 
Keegan lives to exact revenge on the evil demon who sired and abused him. When his father devises a plan to bring on the apocalypse, he and his three half-brothers, interdimensional bounty hunters for the Elden Council, are charged with capturing and delivering their father for punishment.

Art gallery owner Brynn Meyers has no idea that her ability to read memories embedded in objects and drain people of their life force means she has demon ancestry. Unfortunately for Brynn, she’s also the key to raising an ancient zombie army, which puts her on every demon’s Most Wanted List.

And no one wants her more than Keegan’s father.

Keegan must protect Brynn from his father by any means necessary, but he’ll have to learn to harness the other half of his genetics—the far deadlier, uncontrollable half—when he starts to fall for the one woman standing between him and the vengeance he so desperately seeks. The one woman he’ll never be able to resist.

The beginning of BLOOD OF THE DEMON reminded me a lot of the first book in the Doomsday Brethren series TEMPT ME WITH DARKNESS and I really enjoyed that book so I didn't have any issues getting into this one. Brynn always knew she was different so when she was kidnapped by Keegan and his brothers it didn't take her long to believe what they said about her and who she was. The relationship between Keegan and Brynn grows pretty quickly. They feel drawn to each other and possessive of each other instantly. Brynn has her reservations at first of course as she was pretty much kidnapped but Keegan definitely holds out longer and tries hard to push Brynn away while pulling her close. I enjoyed all of Keegan's brothers. It will be fun seeing there stories in books to come. The world that the series is set in is pretty easy to follow and understand. Rosalie does a good job setting it up and explaining it when it needs to be explained. There were a few parts in the book that seemed a little to easy. Whether it was a situation being solved to quickly or maybe a little to unbelievable but the story all together was neat and enjoyable. I think any fans of the multiple character and POV stories will enjoy the first book int he Demons of Infernum series.