UFI welcomes Tara Maya Author of The Unfinished Song series. Thanks for Joining us!!


How To Enjoy Epic Fantasy


The map is there, filled with wondrous names and blank spaces, so you, the reader, can wander around in it. You don’t have to stop traveling where the book ends, but can meander your way around the world on your own, imagining what other nooks and crannies you might find, what creatures and dangers, what adventures and romance. Enjoy!


You don’t have to know the names of all the kings of yore. (See below.) But do reflect on the eon past that have gone into the creation of this world.

Pretend you are a visiting another country, a real one, and the guide is telling you about the various epochs as you gaze across the vine-covered ruins, and suddenly it hits you: These stones were built by people who lived thousands of years ago. Whoah.

That’s the feeling of wonder that fantasy seeks to recreate. Whoah….


Epic fantasy has a lot of characters. A multitude of men. Gobs of goblins. Everflowing elves. A whole host of heroes and vast numbers of villains. And serfs and slaves and peasants and thieves and assassins and gods and five nation’s worth of royal lineages with fifty dead kings each.

Reading name after name, with umlauts and apostrophes, you may panic. Does the author actually expect me to remember all these people?

Here’s a secret. Even the author doesn’t remember half of them. The author is scratching his head wondering, “Did I already name an elf Galadrinel or was that Galafalel?”

If these characters are not that important, why do they have names? Why must they be dragged through the scene at all?


Of course this only works if you love the series, but one of the most enjoyable aspects of a fat, juicy epic is that when you re-read it later, you’re certain to pick up a lot of details and subtleties that you missed the first time around. If the writer is any good at all, you’ll find that he or she foreshadowed so much more about the themes and ending of the series than you realized the first time around.


Like all fantasy, the heroes of epic fantasy have fantastic powers. Mighty thews and magic spells and unique destinies! To be truly epic in scope, the stakes usually involve the fate of the entire world— and the powers wielded by the protagonists and antagonists must be equal to that task—vast indeed. And that’s…freakin’ awesome.
__________________________________

Author Bio: Tara Maya has lived in Africa, Europe and Asia. She’s pounded sorghum with mortar and pestle in a little clay village where the jungle meets the desert, meditated in a Buddhist monastery in the Himalayas and sailed the Volga River to a secret city that was once the heart of the Soviet space program. This first-hand experience, as well as research into the strange and piquant histories of lost civilizations, inspires her writing. Her terrible housekeeping, however, is entirely the fault of pixies. 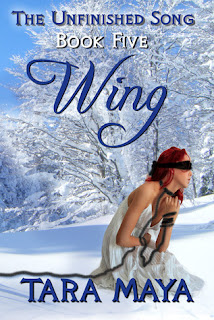 
UMBRAL SERVES THE DEATHSWORN. He exists for one purpose only: to hunt down the last girl with rainbow magic and kill her. Now he has Dindi at his mercy. But he discoverers that the Raptor Riders of Orange Canyon have played with dark magic that threatens all Faeath, and he needs Dindi’s help to stop them.

DINDI BARGINS FOR HER LIFE. She offers to help her captor rescue the White Lady from the Raptor Riders, who plan to use the faery as a pawn in a monstrous scheme. But Dindi will never forget that Umbral murdered someone she loved…and never forgive. She vows to escape and bring him to justice.

A DARKNESS UNCOILS IN ORANGE CANYON. If they can’t work together, the darkness will consume everything.