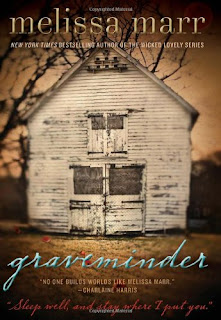 The New York Times bestselling author of the Wicked Lovely series delivers her first novel for adults, a story about the living, the dead, and a curse that binds them.

Rebekkah Barrow never forgot the tender attention her grandmother, Maylene, bestowed upon the dead of Claysville, the town where Bek spent her adolescence. There wasn't a funeral that Maylene didn't attend, and at each Rebekkah watched as Maylene performed the same unusual ritual: three sips from a small silver flask followed by the words "Sleep well, and stay where I put you."

Now Maylene is dead and Bek must go back to the place--and the man--she left a decade ago. But what she soon discovers is that Maylene was murdered and that there was good reason for her odd traditions. It turns out that in placid Claysville, the worlds of the living and the dead are dangerously connected. Beneath the town lies a shadowy, lawless land ruled by the enigmatic Charles, aka Mr. D--a place from which the dead will return if their graves are not properly minded. Only the Graveminder, a Barrow woman, and the current Undertaker, Byron, can set things to right once the dead begin to walk

The world created in GRAVEMINDER was unique and different. The whole Graveminder concept kept me interested in the storyline. I enjoyed all the characters and I was rooting for Rebekkah and Bek from the beginning. Not only did I want them to succeed in their new roles, but I wanted them to get over their pasts so they could be together and happy. I did find that the pacing slowed down a lot at certain points through out the book, but it always picked itself up and got me back into the groove of reading it.  I could see GRAVEMINDER as a start to a new series but I'm not sure if that is planned. I don't think any Melissa Marr fans will be disappointing in GRAVEMINDER.