Early Review: One Grave at a Time by Jeaniene Frost 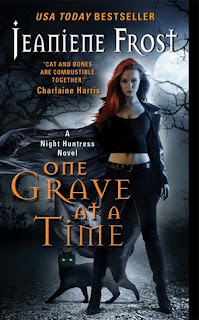 
The grave is one wrong step away.

Having narrowly averted an (under)world war, Cat Crawfield wants nothing more than a little downtime with her vampire husband, Bones. Unfortunately, her gift from New Orleans' voodoo queen just keeps on giving--leading to a personal favor that sends them into battle once again, this time against a villainous spirit.

Centuries ago, Heinrich Kramer was a witch hunter. Now, every All Hallows Eve, he takes physical form to torture innocent women before burning them alive. This year, however, a determined Cat and Bones must risk all to send him back to the other side of eternity--forever. But how do you kill a killer who's already long dead?

My Favorite paranormal couple is back for the sixth installment of The Night Huntress series. I have loved Cat and Bones relationship from book one. They complete and compliment each other in every way.

There wasn't as much emotional relationship stuff in ONE GRAVE AT A TIME but the story was enough that I wasn't missing it TO much but will look forward to hopefully seeing it come back in book 7. Cat is still dealing with her newest borrowed ability from the ghoul queen of New Orleans so she still has a ton of ghosts following her around. An outcast ghost shows up with such a story that Cat and Bones can not help to get involved to put a bad guy away, only its not a normal bad guy, he happens to already be dead. I really loved that some of my favorite secondary characters  Denise, Spade and Ian come in to help Cat and Bones out. Someone new joins the team Tyler and I really liked him. After reading the book he seems to have found a place in the "family" of characters so I'm definitely hoping we will see him again. There was plenty of action and heart stopping moments especially towards the end and the big showdown, I don't think Jeaniene has ever failed in delivering a fantastic ending.

I only have a small idea on where the story will go from the here so I'm excited and impatiently waiting to find out. If you have not read book One in the series HALFWAY TO THE GRAVE I highly recommend you start the series. I feel that book 6 could be read by itself but you would have missed out on so much awesome reading and storytelling that I would feel extremely bad for you. The Night Huntress Series and book 6 ONE GRAVE AT A TIME are must reads.