UFI welcomes Tessa Gratton  Author of The United States of Asgard series. Thanks for Joining us!!

I love to box! It’s a great way to exercise and have fun – about two years ago I hung a heavy bag in the garage and go out to punch it when I need a break from writing.

Besides reading and watching TV (and boxing of course)? I enjoy coffee shops and hanging with friends in our neighborhood pubs. My dog and I have great walks, and I’m a fan of soccer. Go Sporting KC!

That’s hard! I love so many things about it, and manage to find joy (or at least satisfaction in every part). If I had to pick a favorite, it would be writing the climax. I love the thrill of a plot and emotional arc coming together, even when it’s frustrating or there are surprises that ruin everything and I have to rethink and re-strategize, or even sometimes burn it all to the ground.

I’ve worked hard to make sure I can write anywhere if I have to – in friends’ houses or my parents, in airplanes or coffee shops or crowded writing retreats. I prefer to be in my office at home, with big windows and my lovely prairie backyard, with some music that feels like the story I’m telling.

To be honest I read more fantasy than anything. It’s my most beloved genre. But for UF and paranormal I love Anne Rice and Rachel Caine and Holly Black for their great vampires, and Brenna Yovanoff for creepy, atmospheric writing, and Maggie Stiefvater for amazing characters and doing fascinating things with the blurred lines between the magical and mundane.

How would you pitch The United Stated of Asgard Series to someone who has not heard of it before?

The US of Asgard is a United States much like our own, but it was founded by Vikings and their gods. You have high school and road trips, Congress and reality TV, but there are also Valkyrie advising the president and mountain trolls and gods making movies and interfering with professional sports.

Can you tell us a little bit about the world that The United Stated of Asgard Series is set in?

I wrote it because I wanted to play with the similarities between American warrior culture and Viking and Anglo-Saxon epic poetry. So the world is focused on the ways that violence and religion intersects with how we grow up, and how teens have to choose who they are in a very complicated, very violent modern world.

Do you have a favorite scene in The Strange Maid?

I do! It’s a scene that existed in every draft (and there were about 13 of them over the course of 5 years). It sometimes took place on the deck of a ship, sometimes in a Gulf casino, almost always on a cold northern beach surrounded by ancient standing stones in the shape of ships, and finally on the balcony of a run-down lighthouse. Only Signy and her friend Ned Unferth are in it, and all they do is talk. But it’s pretty complicated and mysterious and sexy.

I have a love-hate relationship with Signy Valborn, the narrator. She is so intense and I needed to know her so well to write this hard book about passion and violence and heroism, that sometimes I just couldn’t take it. So although I love her so much as a character, my favorite to write was probably Unferth. He talks like an old man – a very old man – and in riddles and poetry. Plus he’s kind of obnoxious and tragic. A great combo.

How many books are planned for The United Stated of Asgard Series?

Three novels – the third comes out next summer, and I can’t tell you the title quite yet. I’m also going to put out a few novellas in the next year about other important characters.

You probably know I can only talk about this in vague, secretive ways! I’m working on selling my next books now, and can tell you everything I write is fantasy of some kind, probably YA, too. I love YA fantasy! All my current projects are stand-alone novels, too, though in a few years I’m going to focus on a Giant Fat Epic Fantasy Trilogy just to see if I can!
Thanks for having me!
__________________________________ 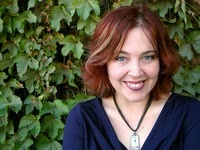 TESSA GRATTON has wanted to be a paleontologist or a wizard since she was seven. She was too impatient to hunt dinosaurs, but is still searching for someone to teach her magic. After traveling the world with her military family, she acquired a BA (and the important parts of an MA) in gender studies, and then settled down in Kansas with her partner, her cats, and her mutant dog. 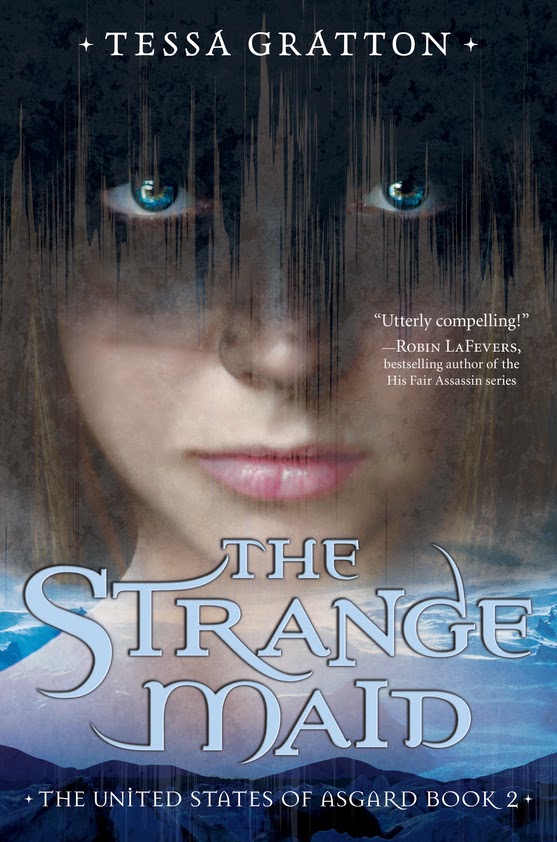 The Strange Maid
The United States of Asgard #2


Fans of Neil Gaiman, Holly Black, and Maggie Stiefvater will embrace the richly drawn, Norse-influenced alternate world of the United States of Asgard, where cell phones, rock bands, and evangelical preachers coexist with dragon slaying, rune casting, and sword training in schools. Where the president runs the country alongside a council of Valkyries, gods walk the red carpet with Hollywood starlets, and the U.S. military has a special battalion dedicated to eradicating Rocky Mountain trolls.

Signy Valborn was seven years old when she climbed the New World Tree and met Odin Alfather, who declared that if she could solve a single riddle, he would make her one of his Valkyrie. For ten years Signy has trained in the arts of war, politics, and leadership, never dreaming that a Greater Mountain Troll might hold the answer to the riddle, but that’s exactly what Ned the Spiritless promises her. A mysterious troll hunter who talks in riddles and ancient poetry, Ned is a hard man to trust. Unfortunately, Signy is running out of time. Accompanied by an outcast berserker named Soren Bearstar, she and Ned take off across the ice sheets of Canadia to hunt the mother of trolls and claim Signy’s destiny.