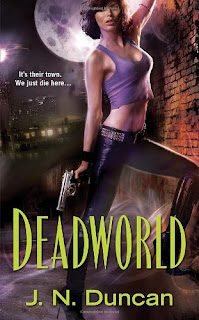 
She's as tough as anything haunting Chicago's streets. But to deal with an inhuman power that won't stay buried, this FBI agent needs help that comes at an immortal price. . .Jackie Rutledge has seen her share of supernatural killers. But her latest murder case is what recurring nightmares are made of. Brutally exsanguinated human victims, vanishing-into-the-ether evidence, and a city on the edge of panic mean that she and her psychic partner, Laurel, are going to need more than just backup . . .

So Jackie is fine with any help rugged P.I. Nick Anderson can give--even if that includes the impish ghost and sexy vampire who make up his team. But Nick is hiding secrets of his own. And Jackie's investigation has plunged them both into a vengeful game reaching back centuries--and up against a malevolent force hungry for more than just victory. . .

Jackie is an extremely angry and jaded person. She had an abusive childhood and now has intimacy and alcohol issues. Nick was ok for a male love interest. He hides a lot and is a bit frustrating to read about but he wasn't boring. The other characters were not anything special. Most were hard to get to like. There was a bit of action. I found the writing to be a bit over worded and the pace was slower then I would have liked it to be. Honestly a week after I read the book I had to go back to the description to remember what the book was even about so I could write my review. I like the cover but DEADWORLD just wasn't anything special to me and I would borrow from the library before purchasing it.