Review + Promo + Giveaway: Of Flame and Light by Cecy Robson 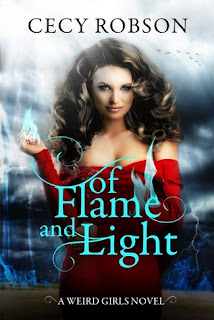 Taran Wird holds the unique ability to conjure fire and lightning. She is mated to Gemini, Second in Command to the Squaw Valley Pack of the Lake Tahoe Region, and the sole werewolf to possess the ability to split into two wolves. And although they are mates, Taran's insecurities have driven them apart.

Devastated by an injury that left her with a zombie-like limb, Taran struggles to regain command over her magic. But when her arm and her power turn against her, lashing out on those she most loves, she knows she can no longer carry this burden alone. Not that she likes the alternative.

The only way to regain control of her magic is to align and learn from the local coven of witches―the very ones who sought to banish her when she and her three unique sisters first moved to the mystical region. But although Taran is trying, the teachings don't come easy, and the tasks leave her weak and emotionally shattered.

Yet Taran must learn and learn fast. Time is running out. The fire she once mastered so easily has become her greatest adversary and is now slowly burning her alive . . .


Taran still hasn't come to terms with losing her arm and the replacement arm that she now has. On top of that the arm knows she can't stand it and goes on the offensive and causes trouble at every turn and puts her family in danger. To try and get things under control, Taran is forced to seek help from the coven and the woman that tried to banish her and her sisters—oh and spends way too much time with Taran's man!

OF FLAME AND LIGHT was a roller coaster of emotions and events. Taran is in a really dark place and it was hard not to fall into it with her. It absolutely amazed me how utterly blind Gemini was when it came to how Taran saw his relationship with Genevieve. He truly didn't understand and it totally blew my mind. I would have thought the same exact things she did and probably acted the same way. It was heartbreaking to watch and I'm glad everything worked out the way it did by the end of OF FLAME AND LIGHT.

I loved the change of scenery that we got with book seven. We get to learn quite a bit about how the witches work and I really enjoyed a few of the new characters that were introduced. Even though OF FLAME AND LIGHT was Taran's book and she has to do a lot of her soul searching and training on her own, it was still great to see the other Wird sisters, their mates and their allies from the previous books. It's great that they all continue to grow with each installment, even when the focus is on another.

I'm not sure what is scheduled to come next for the Weird Girls Series, but I can't imagine not getting more and I will be on the lookout to add book eight to my wishlist.


Son of a bitch.
I groan as I roll onto my back. I’d like to say this is the first time I’ve been knocked unconscious. I’d also like to say my boobs are the same size, but hey, such is my life.
Dirt. All I sense is that and dank heaviness that accompanies a . . . cave? Through the fog taking up residency along my brain, I make out a dim glow. It takes me a moment to realize it’s coming from my light-saber arm. I push up on my hands, grimacing when my fingers sink into the soil. Yet it’s what I see when I glance up that has me scrambling to my feet.
A lonely hand scuttles by me, chasing after a rat. Oh, but it gets better. I press my back against a dirt wall as a foot hops by, chasing after the hand, that’s chasing after the rat, with a decapitated head rolling —I shit you not—merrily behind them.
It’s like some kind of fucked up nursery rhyme. I don’t want to know the next verse, especially not with the collection of zombies gathering from all sides. These are different from the ones who pulled us onto shore. Their grisly faces are more emaciated and their bodies are in a more advance stage of decomposing. As they shuffle toward me, pieces of their skin fall in small moist clumps.
I hold out my hand. “Stay back.”
They collectively moan.
And move closer.
I grit my teeth, summoning that spark from deep in my core. The dank air seems to enclose around me, giving me a chill and snuffing out my inner heat.
Shit, shit, shit.
On wobbly legs, I slide my back against the dirt wall, my hands out. The zombies gather closer, cocking their heads, their empty sockets mesmerized by the glow of my arm. At first, I think they’re simply curious. But then their short thick tongues push forward, appearing to lick what’s left of their lips.
I jump when another hand scrambles by, its pinky brushing against my foot. My back presses against the dirt wall as I slide against it. I’m not sure where to go. I only know I can’t stay here.
I bang my fists against the wall, trying to stimulate my fire. My left hand doesn’t react, tensing uselessly. But that spark I so need triggers from my right arm, igniting flames along the path of my blue veins only to putter out.
Come on, light.


Cecy Robson is an award-winning author of magical realms, to-die-for Alpha heroes, and young adult adventure. A double RITA® 2016 finalist for Once Pure and Once Kissed, and published author of more than fifteen titles, you can typically find her on her laptop or stumbling blindly in search of caffeine.