Interview: When You Believe by Mia Epsilon

UFI welcomes Mia Epsilon. Thanks for Joining us!!

This or That
Character:  Monica, heroine of When You Believe

Angels or Demons  Angels. I think I may have met a few.

Up or Down  Always go up. You fall down soon enough.

Pizza or Pasta Pizza with extra cheese, mushrooms and a ton of bacon

Coffee or Tea Both, but coffee always in the morning

Coke or Pepsi Pepsi, it was "born in the Carolinas" just like me

YA or Adult Adult, thought there's some great YA out there, too.

Knives or Guns Neither, though I do have a gun in my bedside drawer and I know how to use it.

Reading or Writing  Reading everything and anything,. I'm not much of a writer at all.

Mia Epsilon lives with her ever patient and tolerant soul mate hubby in the gorgeous Blue Ridge Appalachian Mountains of North Carolina, USA. She's an avid reader of almost anything but particularly romance, with too many favorite authors to name. Mia is a huge Doctor Who fan, isn't so certain about the writing in the new series yet absolutely adores the new Doctor and his Scottish accent. She also happily suffers a chocolate addiction which causes her to visit her favorite chocolate store, The Chocolate Fetish an abnormally high number of times.

Mia can most often be found at her computer spinning new tales or in a quiet padded nook (a nook, she swears, not a padded room) with her e reader happily engrossed in a new story. She's currently hard at work on her series 'Weddings by C & C' and trying to build its reputation from 'just another wedding story' to 'OMG you have GOT to read this book!' She appreciates all reader input and comments on her Face Book, Twitter, Amazon and Good Reads pages. Her released titles include: 'Wedding Belle Blues', 'Take a Chance on Me', 'When You Believe', and 'That Night' along with a short story in The Wonderland Tales 'Leave Your Hat On'. 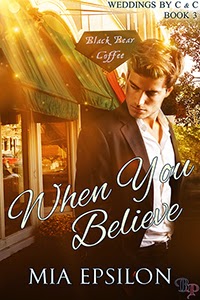 When You Believe
Weddings by C & C #3
Buy Link


Dan and Monica's relationship gets a push from a handsome stranger, but will their love survive the test?

Monica has deep roots in the small town of Abbeville and manages the local coffee shop, which serves as the hub of town news. Deeply in love with Daniel, she still can't help but notice the gorgeous stranger, Michael, who seemingly appears out of nowhere. When Dan begins to pull away from her, what's a girl to do? Tempted to sit home and cry, Monica is determined to push through the uncertainty. Does that mean exploring new options?

Daniel carries secrets he can't share with anyone, even Monica. He's a man with no past and no relatives, so he doesn't believe he deserves a bright future. He is certain pulling away from Monica, his love and the closest thing he has to a family, is the only way she can truly find happiness. But when tragedy strikes Abbeville, will the man with no roots become its savior? Or will he discover Michael's true reason for appearing among them?

"Am I interrupting something?" Dan came in the door and stood just inside, his expression confused. "Is everything okay?"

"No. Amber is convinced Michael is some assassin here to kill someone for Jamie Manning who's part of the Irish mafia." She pointed at Dan as he burst into laughter and glared at Amber. "There. See how ridiculous you're being?"

"Oh, that's too funny. Adam and Emily would get such a kick out of that. I bet Chief Owens would, too." Dan bent over as he continued to laugh. "Come on, that's too silly to be real."

"Well, okay, so maybe it is." Amber conceded with a hard note in her tone. "But you have to admit the guy is weird and freaky things happen around him."

Dan straightened and walked over to put an arm around Monica's shoulders. "He is, I agree. But he's no killer. He grabbed the Marley kid out of the street a few weeks back. And Monica told me how he saved Anna from falling right before she gave birth to the twins. No assassin does nice things like that."