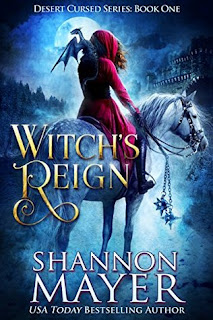 I am cursed by the desert I was born in, and now I wander the space between the Walls meant to hold my kind-the supernatural kind- in.

But life has a funny way of changing directions on you. A freak accident. A child in danger. And a damn Warlock named Merlin who thinks he can manipulate me.

It looks like I'm about to start a journey I never planned on, to face a Witch who has never been challenged, in an attempt to survive a storm of magic, danger, and trickery.


If I'm to be honest, I must start off by saying that If I had known that WITCH'S REIGN was part of the Venom world, I would not not have given it a chance. Thankfully there is only one mention of 'super dupers' in WITCH'S REIGN.

WITCH'S REIGN is part of the same world as Shannon's Venom series—even has some of the same characters—, but it feels different. Which in my book is actually a good start. Unfortunately I feel that we are missing a lot of information. Some backstory is explained and some secrets are revealed, but I always felt like something was being left out.

Let's talk about some of the characters. Zamira is an interesting character that I need to know more about before I can say if I really like her. I mean, for the most part I like what I know so far, but I feel like I need all the information that hasn't been revealed yet. I actually liked Maks—her 'partner' for most of the book— even with his secrets and look forward to finding out more about him. I also want to know more about Zamira's brother, I hope he has more of a spot in book two. I hated Steve from the start and won't be the slightest bit sad if he's killed off quickly along with his 'mate'. I love a good sidekick, but i felt that Zamira was a little too attached and trusting of Lila a little too quickly. I thought Lila was neat and definitely has potential, but I would have just liked to see a little more time go by before there was blind faith there. Especially due to what Lila was and who her loyalties ultimately are to.

I defiantly feel like WITCH'S REIGN has potential, but I'm not hooked yet.