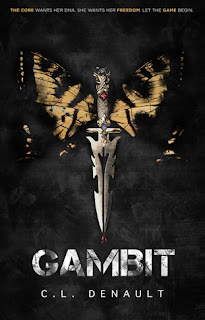 
In Earth’s battle-ridden future, humans have evolved. Those with extraordinary skills rise to power and fame. Those without live in poverty.

Sixteen-year-old Willow Kent believed she was normal. But when a genetically-advanced military officer shows up in her village and questions her identity, long-buried secrets begin to emerge. With remarkable skills and a shocking genetic code the Core and its enemies will do anything to obtain, Willow suddenly finds the freedom she craves slipping through her fingers. Greed, corruption, and genetic tampering threaten every aspect of her existence as she’s thrust, unwilling, into the sophisticated culture of the elite Core city. To ensure peace, she must leave the past behind, marry a man she’s never met, and submit to the authority of a relentless officer with a hidden agenda of his own.

Her life has become a dangerous game. How much will she sacrifice in order to win?


I don't exactly know what I was expecting when I started reading GAMBIT, but it ended up being way more than I thought it would be and I really enjoyed it.

Willow lives what she considers a normal life with her family in a small village until a military officer shows up and questions her identity. She quickly learns that the normal life she has always loved is about to change and she doesn't see it as for the better. Besides the occasional sixteen-year-old tantrum, I found Willow to be a strong character. I enjoyed her way of thinking and I enjoyed watching her grow into herself and her new life.

If I am 100% honest I seriously hated the romantic interest. He was HORRIBLE to Willow in the beginning and it took me a really long time to get over it and look past it. As I got to know him, I ended up liking him a little more, but I'm not sold on him yet. I am interested to see what he does in book two and if it makes me see him in a whole other light.

GAMBIT was full of mystery and intrigue and kept me interested. I loved the world and the whole genetic code causing abilities story line really worked for me. There were quite a few side characters that kept things even more interesting than they already were. I think as the series continues they will continue to intrigue me.  I am really excited to see what happens next for Willow and hope the wait won't be too long until book two.