Angels or Demons : Well I like a nice bad guy, who doesn’t? When I was young and gorgeous (I’m still gorgeous but I’m kinda old) I was a backup singer in Honolulu for Don Ho. He made me his mistress. At the time he had twelve. He was bad. Bad! But so yummy, I tell you.

Vampires or Shifters: I have to go with shifters. My tenant, Lio Pakai is a shifter. I never knew we had those in Hawaii and it’s kinda sexy!
Up or Down: I like both when I’m having sex. Doesn’t everybody?
Pizza or Pasta: Pizza is easier when you’re eating in bed with a hot guy. Pasta gets a little messy. Don Ho used to love pineapple and onion pizza. And me. And not necessarily in that order…

YA or Adult: I only sleep with adults. Did I mention I was once Don Ho’s mistress?

Knives or Guns: Penises. Definitely my favorite weapon of choice.

Reading or Writing:  I prefer to watch movies. Movies with men in them ☺ Nekked men! 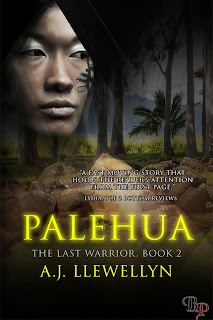 
Lio Paikai is adjusting to both his new, extremely passionate relationship with his lover, Kord Ashley, and his status as 'Ailani, the reincarnated, loyal warrior who fought for the last king of the Hawaiian islands Oahu and Maui. Having severed his ties with his mother, Kalani, Lio grows closer to his father and his new family, but Kalani won't leave them alone.

Violating a restraining order of protection, Kalani is arrested. Hours later, when Lio accompanies his stepmother to a birthing class, a strange woman falls from the sky landing on the hood of his SUV. Old wounds, old curses and the demand for retribution threatens to destroy his entire family. Lio must uncover the identity of the fallen woman and soon learns her heartbreaking connection to his mother and the damage it has caused Kalani her entire life. Lio must right an ancient wrong and appease the old island gods that demand an immediate Palehua: blood sacrifice.

One hour and five minutes later, we walked out of the house. Marcella kept assuring me I'd done very well as she held my arm. My back, neck, and shoulders ached. I'd had to act out giving birth to a baby-doll while Marcella pretended to be my birthing partner.

I felt sorry for my dad. The way she'd screamed at me gave me every indication that she would be a real Nazi in the delivery room.

I was in total panic. I'd had to pretend to give birth to the fake baby so that I empathized with Marcella's process, but found the experience so traumatic I didn't think I'd ever get over it. I kept trying to imagine her vagina opening to a huge, cavernous space as my father massaged the baby's emerging head with olive oil.

Had he done this for me and Louie? What about Marcella? Wouldn't the pain be horrendous?

"Oh, sweetie. Don't do this to yourself."

She flashed me a guilty look. "Well, he sang show tunes as he delivered." She frowned suddenly. "I should have realized then that he was gay."

As we got to the SUV, she peered inside. "Sweetie, do we have any apples in there?"

No, we didn't, but a quick stop over at Foodland would fix that.

As I let her into the passenger side, I stared across the road at a newish house right on the corner. I had no idea why it held my interest, but I caught a sudden glimpse of ghostly children running across the street to it.

I blinked, and nostalgia filled my soul. I couldn't believe what I was seeing. The streets were all gone, and I stared at miles and miles of sugar crops. I was standing on the site of an old plantation.

I saw a flash of a different building right on this corner. It was the kind of old Hawaiian-style building that marked a different era. Painted white and with a red roof, it had a lanai in front. I swear I smelled ice cream and chocolate. I heard laughter.

Across the top I saw in faded lettering the name Goo.

When I got into the driver's side, Marcella said, "What are you seeing, sweetie?"

Shaking my head, I threw off the sudden emotion I felt. "I know it sounds weird, but I got a glimpse of what used to be there."

I hesitated. "A huge sugar plantation. And right where the house is, I saw a shop. A lot of kids went to it. I think it was a kind of soda fountain."

She reached her hand over to mine. "It was. It was the old Plantation Store, but people called it Charlie Goo's Store after the owner. It closed about twenty years ago."

I nodded. A strange, unsettled feeling came over me.

"You think maybe the spirits are getting you ready for a new case?" she asked.

Twenty seconds later, something fell on the hood of the car, making us both scream. It wasn't a coconut. It wasn't a bowling bowl. It wasn't a vagina or even an empathy belly. What fell on my hood and scared the heck out of both of us was a woman. At least, I thought she was.

Review: Dog with a Bone by Hailey Edwards 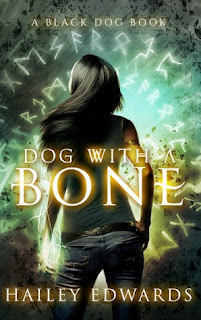 Half-bloods with Thierry’s skill set are given two options. They can join the conclave’s marshal program, or they can pack their bags. Turn down the job offer, and you’ve just shredded your residency pass for the mortal realm and booked yourself a one-way ticket to Faerie.

Texas is the only home Thierry has ever known, and she’s not going anywhere. Even if it means following in her notorious father’s footsteps as a peacekeeper. But pinning on the badge opens her eyes to the fact sometimes fae need protection too, and that sometimes humans are the real monsters.


With a great pace, interesting characters, a complicated romance and a fun storyline, DOG WITH A BONE introduced the Black Dog series and made me want to read more.

The book starts in the midst of what you would consider a final exam, and Thierry is the only one in her class to make it through. She is finally a marshal for the conclave and her partner is the sexy Shaw who she's wanted for a while. I found Thierry to be a fun character that is willing to put herself on the line to get the job done.

The relationship between Shaw and Thierry is a bit complicated. He was her teacher so they couldn't really have a relationship. Now they're partners and it's probably not a good idea now either, but they decide to give it a try anyways. Nothing really happens between the two as whenever they are about to go at it they are interrupted. SO annoying. Would have been nice to see more out of those two.

The story was quick and easy to enjoy. There's a lot of action and danger. The world was easy to understand and didn't require a whole lot of explanation. DOG WITH A BONE might be self-published, but it's well written, so if you're an urban fantasy fan give it a try.