UFI welcomes Sonya Clark Author of Trancehack. Thanks for Joining us!!

Future Noir With a Touch of Magic

Trancehack begins with a mystery. Detective Nate Perez, new in town and unfamiliar with the careful tightrope of life in a zone city, gets his first big case since moving to New Corinth and it’s a doozy. He quickly finds himself tangled in a web of murder, drugs, blackmail, societal pressures, political conspiracy, secrets and lies - and love. He falls hard for a woman the law won’t let him make a life with, captivating witch Calla Vesper.

In 2065, it’s been half a century since the Magic Laws were passed, sending the Magic Born to live in urban zones and denying them basic rights of citizenship. It’s a bleak world for both Magic Born and Normals alike. People deal with it in different ways. There’s a magically enhanced version of ecstasy called nightshade. Arcades where gamers who can’t afford home systems can lose themselves in other worlds for a few hours. There are nightclubs too, like the zone’s infamous dance hall, Sinsuality. Lovers get by on stolen moments and borrowed time, trying to get the most out of the night and dreading the reality revealed by daybreak.

When creating this world, I drew on a love of mystery novels and noir I’ve had for years. Movies like Chinatown, Blade Runner, LA Confidential. The novels of Raymond Chandler, James Ellroy, Michael Connelly. Dark worlds of neon-filled night and forbidden love. Even the Magic Born’s nickname for the zone, FreakTown, was based on one of those movies. I even entertained thoughts of someone paraphrasing the famous line from Chinatown - “Forget it, Nate. It’s Freaktown.” But it didn’t work out.

For me, the perfect fictional world has to include some kind of paranormal element. In the Magic Born series, that element is magic, of course. A few of the witches, Calla among them, are able to use astral projection to enter cyberspace - something called trancehacking. There are other instances in the book of magic combined with technology. I like to think of that combination as witchpunk. It was a fun, exciting way to bring magic both into the future and into the neon-filled city night.
__________________________________

Sonya Clark grew up a military brat and now lives in Tennessee with her husband and daughter. She writes urban fantasy and paranormal romance with a heavy helping of magic and lots of music for inspiration. Learn more at www.sonyaclark.net. Find her on Twitter, Facebook, and Pinterest. 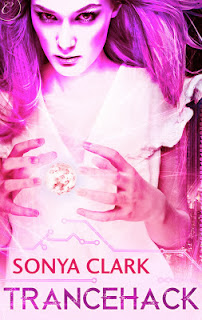