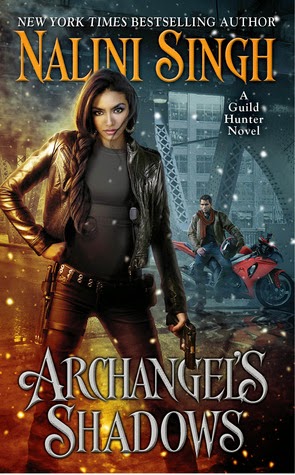 
In the wake of a brutal war, the archangel Raphael and his hunter consort, Elena, are dealing with the treacherously shifting tides of archangelic politics and the people of a battered but not broken city. The last thing their city needs is more death, especially a death that bears the eerie signature of an insane enemy archangel who cannot— should not—be walking the streets.

This hunt must be undertaken with stealth and without alerting their people. It must be handled by those who can become shadows themselves…

Ash is a gifted tracker and a woman cursed with the ability to sense the secrets of anyone she touches. But there’s one man she knows all too well without a single instant of skin contact: Janvier, the dangerously sexy Cajun vampire who has fascinated and infuriated her for years. Now, as they track down a merciless killer, their cat-and-mouse game of flirtation and provocation has turned into a profound one of the heart. And this time, it is Ash’s secret, dark and terrible, that threatens to destroy them both.


I skipped a few books in the Guild Hunter series when the story started branching off to other characters so I wasn't super up to speed on Ash and Janvier. Thankfully I was still able to enjoy ARCHANGEL'S SHADOWS and it was nice that Elenaand Raphael had their POVs told as well.

With everything that happened in the last book (which I did read) it was nice to get back into the swing of things and watch some of the characters as they recover and get back into investigating and keeping the city safe. Ash and Janvier have to work together in their investigations and we get to watch them grow closer and fight their personal demons together. I can't say I was too shocked by the end results of Ash and Janvier's relationship. It was pretty easy to see coming, but I am also glad that it happened. They both deserve happiness and I am glad they found it.

I enjoyed Elana's interaction with the Legion. It seems as though they are really becoming their own persons and I enjoyed the little glimpses into watching them change. Raphael's Mom comes for a visit and I was a little surprised it seemed to go so well.

ARCHANGEL'S SHADOWS was a good mix of urban fantasy and paranormal romance. I enjoyed being in each character's minds and I look forward to seeing what book 8 will be about.