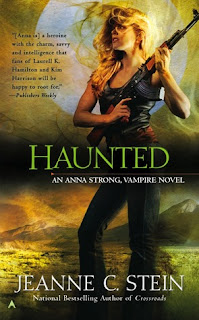 Anna Strong—kick-ass bounty hunter and vampire—has made some enemies in her time. But it’s not just her old foes she should be worried about…

Anna’s shape-shifting friend Culebra finally opens up to her about his life before he owned Beso de la Muerte, a bar catering to supernatural clientele. As if summoned by the conversation, Culebra’s past stumbles into his bar in the form of an old buddy cashing in a favor.


Culebra was a big part of HAUNTED. We get to dig into his past and help him out with the problems that his past is now causing.

Anna is one of my favorite heroines. I always enjoy seeing others underestimate Anna and her coming in to kick their asses. I do miss seeing Anna doing her bounty hunting. She is hunting someone in HAUNTED but I miss her working with her partner and I hope he is back to being by her side at some point in the next book. Anna's love life is kinda wonky in HAUNTED. She starts off happy in a relationship only to have that end. Then at the end of the book she makes a decision that will hopefully make her happy again with someone I really want her to be with. I'm excited about that decision and what it might bring in book 9. The action as always is non stop with non stop heart racing situations. We get visits from Anna's parents and niece, Frey and his son as well as an ex boyfriend who ends up being a big help in taking down Culebra's enemies alongside Anna. The ending was sad but It felt right.

I have enjoyed following Anna's journey from the time she was attacked and turned until now. Book 9 will be the final book in the Anna Strong series and I'm excited and sad to see what will become of Anna and the rest of my favorite characters from the series.