UFI welcomes H.D. Smith. Thanks for Joining us!!

Introducing Ronin … with an excerpt from Dark Awakened, book 2 in the Devil’s Assistant series by HD Smith.

Ronin is a new character in book 2. Claire eventually discovers he’s Mab’s bounty hunter, but she has no clue why he was sent to deliver her to the Countess of East Hareington—or how exactly Mab wouldn’t be involved (as he claims). Below is how he’s introduced in the book.


Without warning the sensations caused by his presence blinked from existence and he appeared in front of me. Startled by the sudden movement, I jumped back, only to be stopped by his strong grip on my arm.

Okay, so maybe it was the accent—vaguely Scottish—or it was the ruggedly handsome god of a man that stood in front of me, but I was momentarily speechless.

Dressed in army-green cargo pants and a skin tight black t-shirt that molded around every well-defined muscle of his chest perfectly, he was simply gorgeous. His tousled blue-black hair was short, but needed a trim. His piercing cobalt eyes sparkled more than shined in the light, and his sun-kissed skin was somewhere between warm honey and a golden bronze. He sported a large don’t-fuck-with-me knife strapped to his thigh, and an angry-looking bullwhip hooked to his belt.
And I still couldn’t sense what he was. I mean, Highlander came to mind, but nothing that told me which of the realms he belonged to. It wasn’t a universal rule that pagans were the blond-haired blue-eyed among us, or that druids tended to have brown hair and brown eyes, and I’d met more than one demon that didn’t fit the black hair, red eye combination, but nothing about this stranger was leaning in any direction.

He was unique. No question about that.

The rough feel of the fingerless gloves that clamped around my biceps snapped me out of my trance. Blinking, I shook my head. Who is this guy?

He was big, maybe not as big as Quaid, but close—easily six-eight. He looked to be in his mid-thirties, but considering he had the power to make himself invisible, I was sure that meant nothing.

He studied me with his cool, fathomless eyes. I swallowed. I wasn’t sure if it was the dust in the air or the fact that this big guy was towering over me, but my chest tightened and it felt hard to breath. I tried to raise my hand to his face. I could compel him to let me go. The touch magic was a side benefit of having Mab’s mark. I was fairly sure she could compel from a distance, but I had to be in physical contact to make it work. He tightened his grip, pinning my arms, which prevented me from touching him.

“I haven’t broken any of the rules.”


Find out more about what’s in store for the bounty hunter in Dark Awakened, book 2 in the Devil’s Assistant series by HD Smith.

HD Smith has been writing for over ten years. She is a software developer by day, working for an awesome cruise line in Celebration, FL.

HD grew up in South Carolina, but has called the Sunshine State home since 1997.

She has Computer Science degrees from Clemson University (BS) and Florida Institute of Technology (MS). Her other hobbies include painting and screen printing. She enjoys creating t- shirts inspired by the places in her books. For more information, visit HD’s website at http://www.hdsmithauthor.com/ 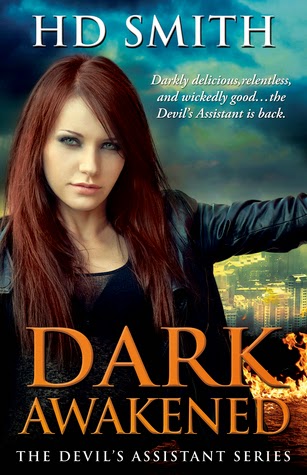 
Last spring Claire’s seemingly normal—if not totally screwed up—life was tossed on its head. For five years she’d been one of the damned—a human that knows the truth about the otherworldly among us. She’d worked for The Boss—the Demon King himself—as his administrative assistant, handling everything from early retirements, to Maintenance’s incessant requests for dental.

No one gets dental.

Then she walked into Purgatory—totally not her fault—went back in time, and awakened powers she never knew existed. Now Claire has a prophecy hanging over her head, a diamond ring hidden in her sock drawer, and the blood of a long dead royal running through her veins.

And it’s only going to get worse.

Her vow to live free or die takes a serious hit when she’s forced back under The Boss’s protection. Of course, there’s no protection from fate, or the Bounty Hunter sent to deliver her to Purgatory. And as if being “the girl” in the prophecy wasn’t enough, Claire soon discovers there are three other contenders for her role—two of whom want her dead.

Follow more of Claire’s adventures in Dark Awakened, the second installment of the Devil’s Assistant Series, to find out if she’s lucky enough to escape with her life, or if she’s just the first notch on the next contender’s belt.