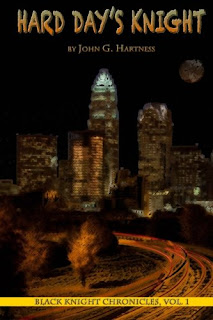 The police are stumped.

Halloween is coming, with an ancient evil on the horizon.

The vampires are the good guys.

This is not your ordinary fall weekend in Charlotte, NC. Vampire private detectives Jimmy Black and Greg Knightwood have been hired to keep a young client from being cursed for all eternity, but end up in a bigger mess than they ever imagined.

Suddenly trapped in the middle of a serial kidnapping case, Jimmy and Greg uncover a plot to bring forth an ancient evil into the world, and enlist the help of a police detective, a priest, a witch, a fallen angel and strip club proprietor to save the world. This unlikely band of heroes battles zombies, witches, neuroses and sunburn while cracking jokes and looking for the perfect bag of O-negative.

It took me a bit to get into HARD DAY'S KNIGHT but it ended up being pleasantly entertaining. There is a ton of sarcasm and humor and the author did a good job with making fun of the typical vampire myths. The private detectives Jimmy and Greg are not your typical vampires, I found them to be a bit nerdy and determined to be the good guys. They were a good team and I enjoyed the bantering between them. There was a lot of things going on in the story and the pacing was nicely kept.  Since I live in Charlotte I thought it was pretty neat that the story took place there. There was a good mix of the paranormal. There were witches, demons, zombies,  and even Lilith makes an appearance. The only thing that annoyed me is some typos and missing words. There were a few times that It ended up ruining my reading concentration because the paragraph wouldn't make sense and I would have to go back and read and interpret what it was supposed to say. This was the first book of Mr Hartness' that I read and I enjoyed it.

Tue May 24
Blood Magic (Blood Journals, #1) by Tessa Gratton
Mind Games by Taylor Keating
Something Deadly This Way Comes (Madison Avery, #3) by Kim Harrison
The Vampire Narcise (Regency Draculia, #3) by Colleen Gleason
The Vampire Who Loved Me (Harlequin Nocturne, #113) by Theresa Meyers
Zombies Sold Separately (Night Tracker, #4) by Cheyenne McCray
Wed May 25
Chasing the Moon by A. Lee Martinez
Please contact me if you see something is missing and I will add it. :)
Posted by StacyUFI at 6:00 AM 1 comment: