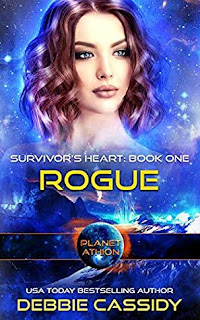 Ever since I was betrayed and taken from my home planet, ever since they pumped me with poison and abandoned me on this asteroid to fight or die, I’ve been surviving.

But I’m not alone.

There are others with me, alien to me, just as I am to them. Separated into Houses we fight as a team on the blood-soaked sands while the elite watch.

Each day is about survival until him.

An outsider, he brings death, but he might also be our salvation.

A Sci fi adventure with a Whychoose romance and part of the Planet Athion world.


I had no clue that ROGUE was part of an ongoing multi-author series before reading it and starting this review.  I'm not really sure how I missed this fact, but I feel like you can read this book without knowing the world and species that live in it.

I would have liked some more backstory. I didn't feel like we knew enough about the world or the characters and I didn't feel like we got enough information about the characters and species of the world while in the story. Then again. If I would have read the series from the beginning, I would know these things, so I won't fault the story for those points.

I DO feel like I would have benefited from knowing more about the characters in Debbie Cassidy's story. We do learn some things about them, but I think the length of the book really made it hard to get to know them. I didn't feel like I could totally connect with Rogue because I didn't feel like I got to know who she was. I know she's bad-ass, but that was about it.