The legend of the vampire has changed through the centuries with various names for the blood-sucking creature. During the 1500s, they were named demons or witches who could cast spells and drain the life force from their victims, along with drinking their blood. In the 1800s, vampires became more like the blood-drinking creatures depicted in movies and books of today. It wasn’t until the 1800s when driving the stake through the heart came into practice to stop the vampire from rising. In medieval time, they had a whole different ritual.


According to medieval and religious texts, the vampire was called a shroud-eater. The vampire would eat through the burial shroud, which the texts claimed was like mother’s milk to the vampire. Once they ate through the shroud, they would suck whatever remaining life force remained in the corpses around them. They also believed that a vampire could cast a spell from the grave to spread the plague and make himself or herself more powerful. When the vampire had enough strength, it would go out and feed on the living. 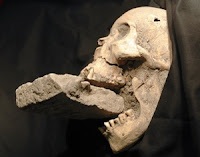 Not too long ago, archeologists unearthed a corpse in Venice where a vampire ritual had been performed. The 16th century woman had a brick stuck between her jaws. The well- preserved skeleton was found on Lazzaretto Nuovo Island, north of Lagoon City. The supposed vampire was buried among other corpses in a mass grave during an epidemic that hit Vencie in 1576. This is the first evidence found of an exorcism against a vampire.


When there was an epidemic, graves were reopened to bury the new corpses. Unfortunately, we do not dissolve gracefully into dust once we die. Bloated bodies from gasses, blood seeping out of the mouth due to decomposing organs, and holes in the shroud from bacteria in the mouth would leave a disturbing impression that the corpses was somehow alive and feeding off the other bodies. You have to remember this is a time where the spread of bacteria was virtually unknown. Superstitions were at a high when plague epidemics broke out. It is no wonder their imagination conjured up vampires and ways to kill them. 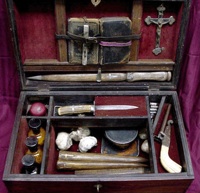 In the 1800s a vampire kit was available for purchase. There were stakes, mirrors, a gun with silver bullets, crosses, a Bible, holy water, candles and even garlic. It was all housed in a American walnut case with a carved cross on top. One of these kits was attained for $14,850 in an auction.


In Love’s Eternal Embrace, I took the Irish legend of the Dearg-due and added few twist of my own to pen this 13th century tale of romance.

Blurb:
A knight... A lady... And a deadly dark secret...
A fiend dwells in the forest and Sir Liam Cantwell sets out to slay it. Only the fiend is
a fair maiden named Glamis Drui. Will Liam fall prey to her deadly embrace or will his
knightly charms be her undoing?

***I’m offering a coupon for a free e-book copy of Love’s Eternal Embrace to one lucky commenter. All you have to do is answer this question: What is your favorite vampire legend, book or movie? I look forward to reading your answers. 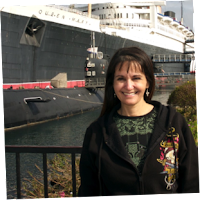 Karen Michelle Nutt resides in California with her husband, three fascinating children, and houseful of demanding pets. Jack, her Chihuahua/Yorkshire terrier is her writing buddy and sits long hours with her at the computer.
Her new passion is creating book covers for Western Trail Blazers and Rebecca J. Vickery Publishing.
Whether your reading fancy is paranormal, historical or time travel, all her stories capture the rich array of emotions that accompany the most fabulous human phenomena—falling in love.
__________________________________
Find Karen and her books
Website / Twitter / Facebook
__________________________________ 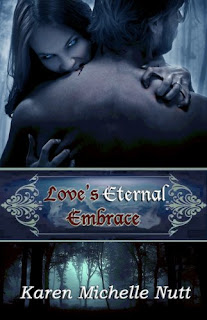 A fiend dwells in the forest and Sir Liam Cantwell sets out to slay it. Only the fiend is a fair maiden named Glamis Drui. Will Liam fall prey to her deadly embrace or will his knightly charms be her undoing?