Review: Brand of the Pack by Tera Shanley 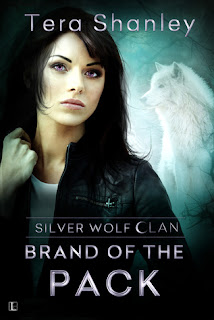 As the last of the Silver Wolves, and the only female with the ability to produce werewolf offspring, Morgan Carter is a wanted woman. Male suitors from all packs vie for her, and threaten the safety of her young niece, Lana. But there is only one man Morgan wants...

The last of his control...

Greyson Crawford has been through hell and back for Morgan. And he’d do it again. But until she learns to trust him, and lets him claim her as his own, he can’t fully protect her. When a force more powerful than either have known threatens to tear them apart, can Greyson convince Morgan to accept him as her mate once and for all, before it’s too late?


BRAND OF THE PACK made me like Greyson and Morgan again after the events of BLACK WOLF'S REVENGE turned me off of them.

The story starts up right after BLACK WOLF'S REVENGE ends. Morgan is ready to ask for Greyson's forgiveness and comes to him. I appreciated the way things played out during this time. The feelings were there and neither of them played games. Morgan is stills scarred from her experience with the Montana wolves and Greyson is gentle with her and gives her the space she needs to feel comfortable again. Until the couple is officially mated, Morgan is still considered "up for grabs" and Greyson is more than happy to beat the crap out of anyone that attempts to claim her.

Why am I only giving BRAND OF THE PACK 3 stars? Because some things happened early in the book where someone called the Dragon was introduced and we were left hanging. He made some pretty serious threats if certain events were to happen and the events happened so????? This is one of those series that I seem to always have issues with, but can't help reading the next book when it comes out.