UFI welcomes Nicole Zoltack Author of Champion of Valor. Thanks for Joining us!! 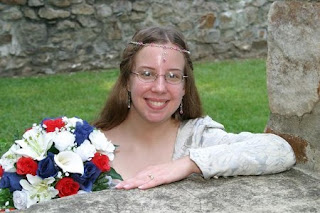 As a reader, I'll read just about anything so it comes as no surprise that I'm a whore when it comes to writing as well. I write both urban fantasy and high fantasy (fantasy set in a medieval-like world), paranormal stories, romances, YA, and combinations thereof.
Urban fantasy is fun to write because the combination of the real world and magic and paranormal creatures provides so many awesome opportunities for storytelling. I have a paranormal YA short story series called What You See is What You Get about a world like ours which is separated from a world filled with paranormal creatures by a veiled mist that only a few people, called seers, can see beyond.
High fantasy is nice because it combines the romance and chivalry of knights with magic. The last book in my Kingdom of Arnhem series, Champion of Valor, focuses on the love a mage and a selkie amidst a war between two kingdoms. Magical dreams plague Gabrael and Selliki and seem to taunt them that their love can never be.
Why do you like to read fantasy (whether urban or high) stories?
__________________________________
Author Bio: Nicole has always been fascinated with the Middle Ages and the Renaissance. She devoured books about chivalry and knight, love and romance, she even had a Renaissance themed wedding.

Throughout her research, she wondered if there were any female knights, knowing how women were treated back then. To her surprise, she uncovered information about an entire order of female knights - the Order of the Hatchet in Catalonia. These brave women protected their town of Tortosa from Moor attack. Along with their new status, the women were exempted from taxes and preceded over men in public assemblies.

This inspired her to write about a young girl who wishes to become a knight, citing these brave women.

Currently, she is residing in Pennsylvania with her loving husband and two adorable sons. She is an Infinite World of Fantasy Author (IWOFA) and a member of Classic Romance Revival (CRR).

Her debut novel - WOMAN OF HONOR (Desert Breeze Publishing, April 2009) is the first in the Kingdom of Arnhem series, the story of the young would-be female knight. Book II - KNIGHT OF GLORY further explores the medieval fantasy land of Arnhem.

She has also sold numerous short stories for inclusion in various anthologies including the print anthologies: Bloody Carnival, Mertales, Daily Bites of Flesh, and Daily Flash. 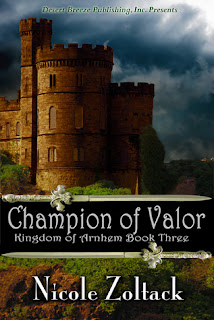 The Mystical Conch Shell of the Sea has been stolen, and it's up to Selliki, the selkie, to get it back. Selliki sets across the continent of Alethereia to find Arnhem, and Gabrael, the mage she loves. Selliki knows that no union between a selkie and a human have ever had a happy ending, but neither can ignore their feelings. Each night, they experience terrible, real dreams that show how doomed their love is.

The final war between Speica and Arnhem is threatening the entire world. Lucifer has aligned himself with Speica and wants nothing less than to bring about the Apocalypse before its time. In the last battle, cowardice is revealed, promises are broken, and many people die. Trolls fight icthyocentaurs, dwarves armed up against the Drow, angels against demons. Only one kingdom will prevail; that is, if the world doesn't end.

Night came, and they set up camp. Gabrael closed his eyes, and sleep claimed him. When he opened his eyes, all he could see was white. Something appeared in his hands -- Selliki's seal skin. He shoved it into a trunk that materialized out of nothing and locked it.
Selliki entered a few minutes later, looking lovely in a long blue gown. "Come, dear, it's time to be married."
Days passed, weeks, months, years. The two were extremely happy together and even had two children, a precious little girl and a strong, hardy son.
One day, Gabrael practiced magic with their daughter, Yara, on the beach. "The fire comes from within, deep inside your belly. Just feel it, move it up to your throat and blow." Gabrael demonstrated as a shot of flame exited his mouth.
Yara clapped her hands. "I want to try!" She furrowed her brow and blew. Nothing happened. She opened her mouth to try again but her concentration was distracted. "Mama, why are you running?"
Gabrael glanced behind him. Selliki ran toward the ocean, something dark in his hands.
Raphiel hurried over. "I found your trunk, Father."
Gabrael muttered a curse and jumped to his feet.
"What's wrong, Father?"
"Where is Mama going?"
Gabrael ran toward Selliki. He reached out with his arms to stop her, so they could talk, but his arms touched air. She had already dived into the water.
Gabrael stood there, by the water's edge, all night long and for the following day, before the knowledge came to him. Selliki had forsaken him. She was never coming back.
A single tear ran down Gabrael's face and dripped off his nose onto the sand. He turned his back on the water and cried. Maybe love isn't enough. How can I ask Selliki to abandon her very nature?
_________________________________
Find Nicole and her books
Website / Twitter / Facebook / Email
__________________________________

Be sure to leave a comment to be entered to win some signed post cards and magnets. Each comment during the Champion of Valor Blog Tour gives you an entry for the grand prize: a copy of the entire Kingdom of Arnhem trilogy - Woman of Honor, Knight of Glory, and Champion of Valor.
Posted by StacyUFI at 3:00 AM 12 comments: