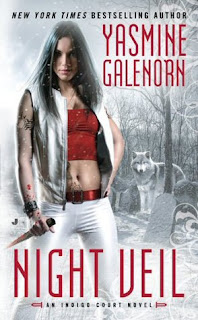 
Eons ago, vampires tried to turn the Dark Fae in order to harness their magic, only to create a demonic enemy more powerful than they could have imagined. Quietly amassing their strength for centuries, the Vampiric Fae-led by the merciless Myst, Queen of the Indigo Court-are determined to enslave the world. Only one witch stands in her way...

Cicely Waters grew up believing she was simply one of the magic-born-a witch who can control the wind-but when she returned home to New Forest, Washington, she discovered she was also one of the shifting Fae. Now she must perfect her gift. For Myst, Queen of the Indigo Court, has captured Grieve, the Fae prince who holds Cicely's heart. To save both her beloved Grieve and her friend Kaylin-whose demon is waking-Cicely must journey deep into the heart of the Indigo Court. But even as Cicely gathers strength, old alliances are breaking faith.

And new allies, like the hedonistic vampire Lannan Altos, promise to take Cicely down a far darker path than she's ever traveled before.

The reason I picked up book one in the Indigo Court series was because the cover completely jumped out at me and as I was reading thorough the book I could picture Cicely being exactly like the cover portrayed her.

NIGHT VEIL starts just after NIGHT MYST ends. Grieve is pretty much a prisoner and under the control of Myst. Cicely is adjusting to all the things she learned about herself in book one and preparing for battle against Myst. Cicely in NIGHT VEIL finds out who her allies and enemies really are and you will be shocked at the revelations. I have not come across one book of Yasmine's yet that I did not enjoy. The Indigo Court series is mystical, filled with action, and has a great array of characters and creatures. The story flows perfectly through the twists that Yasmine throws at us. So much happened at the end of NIGHT VEIL that I wish I would have waited to read it until it was closer to book 3 coming out because Im dying to know what happens next. If you have been a fan of Yasmine Galenorn's or have read the first book in the Indigo Court Series NIGHT MYST you will not be disappointed in reading NIGHT VEIL and if you have never read anything of Yasmine's go grab book one and jump in.