UFI welcomes Rebekah R. Garniere Author of Dead Awakening. Thanks for Joining us!!

Hi! I'm Rebekah. Thanx so much for having me today! My debut novel Dead Awakenings is an Urban Fantasy/Paranormal Romance about Deaders. A new form of Reanimated Undead.

I frequently get asked if I have a playlist I like to listen to when I write or if I write without noise. I have to have noise when I write. I have four kids that I home school and if there isn't noise around me I get antsy and think there's something wrong. I can't stand silence. Unless I'm asleep. I have to have total quite when I'm sleeping.

But when I'm writing I like to have the television on for noise, or I have a specific playlist. I've been listening to some of these songs for a long time. I've always loved music. I've been able to deal with emotions through songs before. It hits me hard. I cry to so many songs when I hear them, yeah I'm sensitive that way.

Anyway, since music touches me so deeply, I use it as a tool in my writing. I write Tortured Alpha Males and Kick Ass Heroines. I have no problems with the heroes. They actually are really easy for me to write. The heroines are a different story though. I have problems sometimes getting them to come across well. So I need a bit of help. And for that help, I turn to some tough and amazing singers.

Pink! Yes, Pink. She is my favorite tough, balls to the wall, all out female. Her music is strong, and inspires me to write hard hitting females who don't take crap from people. Even though they are sensitive inside.

Kelly Clarkson. I love her music. She has strong women songs, but she also has many touching songs that hit me deep, so I like the emotion behind her singing.

Katy Perry. I think she is great. Her songs are fun and uplifting and teach people to be who they are.

For strong males, I like Green Day, Live, Train, Imagine Dragons, Fun and several others.

I love music. If I had to choose between going blind and going deaf, I would choose to go blind. It would be tough, but I know I couldn't live without music.

Rebekah grew up on both the east and west coasts and currently lives in the Los Angeles area. From the Giving Tree by Shel Silverstein to The Stand by Stephen King, Rebekah immersed herself in other people's made up worlds. She began writing in junior high and then found she liked pretending to be other people's characters in high school. Lettering in drama she went on to study theater in college as well. After college she continued acting till becoming a mom. Ultimately, she ended up going back to writing her characters down instead of acting them out, so she could stay at home with her kids.

Rebekah is a member of Romance Writers of America and is a board member of both the Fantasy, Futuristic, & Paranormal and her local Los Angeles chapters. When she isn't spending time telling the lives of the characters constantly chattering inside her head, you can find her with her husband and four children; reading comic books, gaming, at the movies or taking care of the menagerie of pets. A dog, a rabbit, two bearded dragons, and three tortoises. Wonder woman, the escaped snake, has yet to be located. 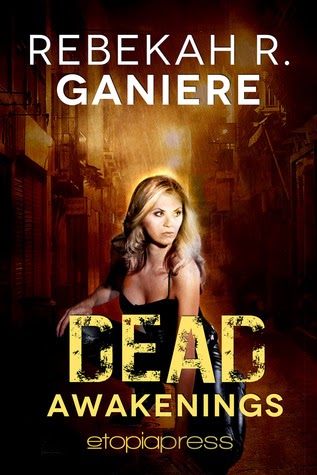 
Evaine, a struggling New York theater student, enters an unsanctioned drug trial in an effort to pay bills. She awakens in a derelict hospital, chained to a bed with no memory of who she is, or how she got there. A band of pale skinned men, led by the gorgeous Luca, burst in, whisking her away to safety.

Once at Haven House, Evaine is introduced to The Family. Like them, she has become A Deader, a reanimated Undead.

Luca is hell-bent on stopping the experimentations, and killing those responsible. He has no time for a Newborn who is struggling to control her rages, hunger, and powers. Nor does he have the desire to deal with the feelings she's awakening within him.

Despite their best efforts, Evaine and Luca find their connection intensifying when suddenly, she remembers not only who she is, but also her fiancé, Tristan; who is still looking for her.

Torn between her first love and her new heart’s desire, Evaine runs back to Tristan putting everyone in danger. When a rogue faction of Deaders, called Feeders, attempts to kidnap her, Luca suspects Evaine is the key to the experiments.

Can everyone band together to keep Evaine off the cutting table of those she escaped from? Or will second death tear her away from everyone, for good?