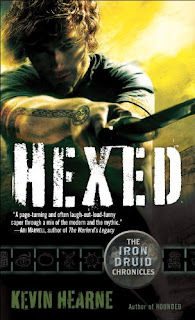 
Atticus O’Sullivan, last of the Druids, doesn’t care much for witches. Still, he’s about to make nice with the local coven by signing a mutually beneficial nonaggression treaty—when suddenly the witch population in modern-day Tempe, Arizona, quadruples overnight. And the new girls are not just bad, they’re badasses with a dark history on the German side of World War II.

With a fallen angel feasting on local high school students, a horde of Bacchants blowing in from Vegas with their special brand of deadly decadence, and a dangerously sexy Celtic goddess of fire vying for his attention, Atticus is having trouble scheduling the witch hunt. But aided by his magical sword, his neighbor’s rocket-propelled grenade launcher, and his vampire attorney, Atticus is ready to sweep the town and show the witchy women they picked the wrong Druid to hex.

Oberon seriously makes me bust out laughing at every turn, he is the best dog ever. Atticus is as sexy and kick ass as ever in Kevin Hearne's second addition to the Iron Druid Chronicles. He teams up with the The Sisters of the Three Aurora's to kick the butts of some German witches that come rolling into town with demons.  I really enjoyed getting to know Malina and the local coven better. In book one they were the evil witches but the remaining coven members really stepped up and showed that they can be great allies. All supporting characters really bring that extra something to the story. The Morrigan makes a few appearances again and I just cant tell with her what her next move will be. I love the mix of action, humor and mythology that Kevin continued with in HEXED and cant wait to see what HAMMERED will bring to the table.  Maybe we will get some actual romance between Atticus and Granuaile?? One can hope.