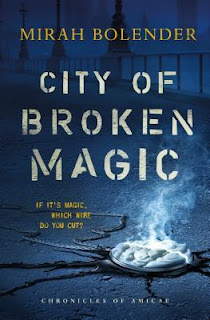 Five hundred years ago, magi created a weapon they couldn’t control. An infestation that ate magic—and anything else it came into contact with. Enemies and allies were equally filling.

Only an elite team of non-magical humans, known as sweepers, can defuse and dispose of infestations before they spread. Most die before they finish training.

Laura, a new team member, has stayed alive longer than most. Now, she’s the last—and only—sweeper standing between the city and a massive infestation.

I was pretty excited about CITY OF BROKEN MAGIC when I read the blurb, but I just couldn't get into the story. I hate to say it, but I skimmed a lot of the book after the first half. The world was actually pretty neat, I just couldn't stay in the zone and got bored while reading.

I actually really liked the characters. Clae was brusque, but interesting. I hated how things ended with him. Laura was strongly built and I liked her right off the bat. The side characters were also easy to like.

I'm not really sure where CITY OF BROKEN MAGIC went wrong. There was a lot of information given and I think I just got lost in all of it. I also didn't feel like the plot was strong enough to carry everything through to the end.

I won't read more from this series, but I didn't totally hate what I read.