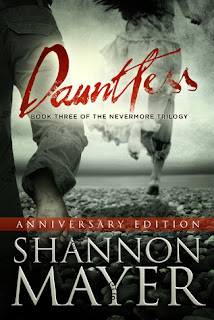 "My name is Mara, and I want desperately to become a mother."

All of my dreams were dashed when the world was promised hope but instead became a place of danger, death . . . and monsters.

When we arrived at the compound, we believed we had found our safe haven at last. For the briefest of moments, their medicine and science lulled us into a false sense of security. But within the bowels of this haven, where the cure for Nevermore is being developed, there lurks an evil which is far worse than anything we've already encountered.

Sebastian is used as a test subject, a process that instead of curing him, is slowly killing him. As his heart falters, mine must draw upon new strength if I am to fight our way out of the compound.

If we can escape, the journey will still not be over. I will have to protect Sebastian, a vial with a possible cure and our final secret.

But before safety, that vial must first make it out intact even with the knowledge that it may very well kill Sebastian, before saving the others.


I was anxious when I started reading DAUNTLESS. I really enjoyed SUNDERED, but couldn't get into BOUND so I wasn't sure what DAUNTLESS was going to bring.

For the most part, I enjoyed DAUNTLESS almost as much as I enjoyed book one. There is a lot of action and suspense involved in Mara and Sebastian's journey to safety and it was nice to have an old ally along for the ride. With Sepastian having had the cure and converting back towards the side of human, the lovey scenes were easier to take. Things definitely got interesting when it came to the Nevermore though now that he isn't really one of them anymore.

Not everyone makes it to the end of DAUNTLESS, but I expected that. What I didn't expect was the way some of them were lost. I don't want to go into it due to spoilers, but one death in particular really bothered me. I thought that it was selfish of Mara and Sebastian to let it happen after everything, but I can honestly say that if I was in their position, I probably would have made the same choice so who am I to judge? It was still hard to read though.

The ending felt really abrupt. After all the things the couple has been through I was hoping for more when it came to their happily ever after and the last few paragraphs made me think that their should be more to their story. They got their happily ever after, it just seemed like the ending was rushed and I would have loved to sit and savor it more. Overall though, I enjoyed Mara and Sebastian's story.