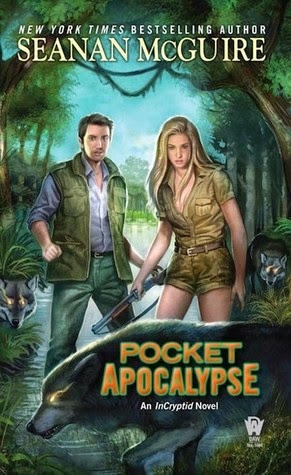 Alexander Price has survived gorgons, basilisks, and his own family—no small feat, considering that his family includes two telepaths, a reanimated corpse, and a colony of talking, pantheistic mice. Still, he’s starting to feel like he’s got the hang of things…at least until his girlfriend, Shelby Tanner, shows up asking pointed questions about werewolves and the state of his passport. From there, it’s just a hop, skip, and a jump to Australia, a continent filled with new challenges, new dangers, and yes, rival cryptozoologists who don’t like their “visiting expert” very much.

Australia is a cryptozoologist’s dream, filled with unique species and unique challenges. Unfortunately, it’s also filled with Shelby’s family, who aren’t delighted by the length of her stay in America. And then there are the werewolves to consider: infected killing machines who would like nothing more than to claim the continent as their own. The continent which currently includes Alex.

Survival is hard enough when you’re on familiar ground. Alex Price is very far from home, but there’s one thing he knows for sure: he’s not going down without a fight.

POCKET APOCALYPSE brings Alex and Shelby to Australia where they are willing and ready to help Shelby's family with their werewolf problem. You thought the Prices were difficult? Just wait until you meet the Tanners.

Alex and Shelby might not always seem like the most obvious couple, but watching them work together in POCKET APOCALYPSE made it clear they are meant to be. It was nice to see how other cryptozoologists live and work. It wasn't so great to see their prejudice towards those that are not human. I am glad that Alex and Shelby were able to go there and help and show them that not all 'monsters' are monsters. Alex did not have an easy time in Australia. Shelby's dad was not happy that his 'little girl' brought a man home, but even worse, he doesn't like that Alex's family is former covenant. He questions his actions at every turn and gives him a really hard time about everything.

On to other things. It's great to see Sarah getting better. She isn't herself yet, but she is closer than she was during the last book. I continue to love the Aeslin mice. They are a big hit in every book and as I learn more about them, I like them even more.

There have been two books for Verity and Dominic, two books for Alex and Shelby, will Antimony be next? Can't wait to find out and learn more about her.


Pocket Apocalypse is also available as an audiobook from Audible Studios. Enjoy this clip.